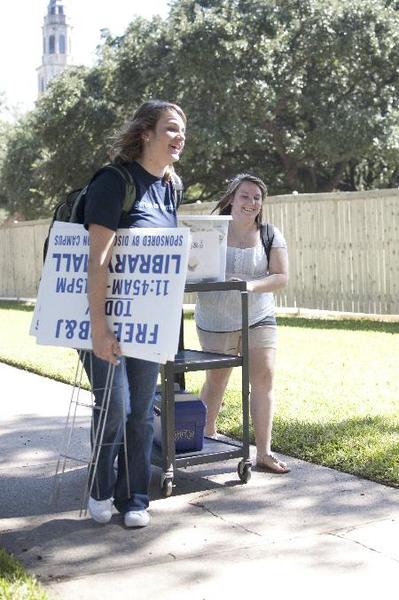 A student group that received a citation from a city health inspector after distributing peanut butter and jelly sandwiches on campus may resume its activities after it clarified that the products are only intended for the campus community.

During a regular inspection of the dining services on campus on Sept. 28, a city health inspector, accompanied by Sodexo representatives, passed by the Disciples on Campus peanut butter and jelly booth and student medical organization Alpha Epsilon Delta’s bake sale near the library. Noting the violation of selling homemade foods without a permit, the inspector issued a citation to close the operations immediately.

DOC has since resolved its citation and began making sandwiches again Monday.

The group’s sponsor, the Rev. Jeremy Albers, said the main issue was clarifying who was allowed to access to the food. The group uses purple people counters, Albers said, which allows students and faculty to swipe their ID cards and be recognized as part of the university community, thus making the food distribution legal.

Andria McAuley, consumer health specialist for the City of Fort Worth, said this change makes the event private, and therefore the city does not require a permit to continue operations.

Craig Allen, director of Residential Services, said the group was in transit between the two sides of campus when the inspector issued the citations. Allen said the shutdowns were coincidental and had nothing to do with Sodexo, which provides dining services on campus, because the citations where not issued in a Sodexo facility.

AED members said they would have raised more money for charity if the city’s health department had not shut down the bake sale, which aimed to raise funds for Heroes For Children, a nonprofit organization that provides financial support to families with terminally ill children. The money from the sale would go toward a Christmas party for the children.

Denise Bennett, the academic specialist for the PreHealth Professions Program, asked the health inspector not to write the citation for AED because the proceeds they earned would be negated through any fines imposed on the bake sale. Bennett said she told the inspector that they would take the bake sale down immediately to retain the charity funds. The inspector did not include fines in the citation but required that AED shut down its bake sale immediately.

Originally, Bennett said AED members planned to sell the baked goods from 10 a.m. to 2 p.m., or until they sold out, but the sale ended almost three hours before the scheduled time. The group raised $267 in its allowed time.

Although DOC discovered how to continue distributing food on campus, AED member Jennifer Haase said AED members did not plan to hold another bake sale to make up for lost profits.