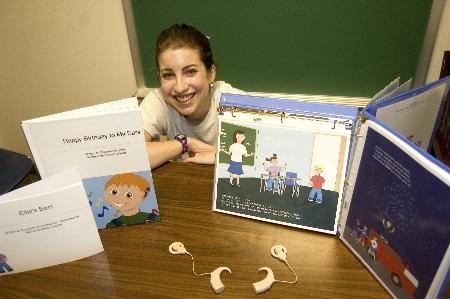 As a child, Elizabeth Boschini said she read books which portrayed deaf children as different and passive. Now given the chance to write her own books, she wanted to portray them as normal people in control of their lives.

The senior speech pathology major has authored two books, “Ellie’s Ears” in May 2008 and “Happy Birthday to My Ears” in June 2008. “Ellie’s Ears” is about an 8-year-old girl with bilateral implants, a hearing aid placed partly behind the ear and a second part surgically planted under the skin. She explains them and her hearing loss to a new student in her third grade classroom, Boschini said.

Boschini, who is Chancellor Victor J. Boschini Jr.’s daughter, said her desire to work with the deaf started in fifth grade when she met a girl named Lauren Farnsworth. Farnsworth had a profound hearing loss and used a cochlear implant for hearing and listening in the classroom.

The cochlear implant allowed Farnsworth to listen and interact like a normal fifth-grade student, Boschini said.

There was a large population of students who didn’t have the opportunity to receive cochlear implants to listen or talk, Boschini said. She learned sign language to communicate with the students.

“I became a teacher and a friend to those students”, Boschini said.

Speech pathology professor Lynn Flahive said she has known Boschini for two years, serving as her academic adviser, professor and clinical supervisor. In that time Flahive had seen Boschini’s “motivation and passion” through her work,” Flahive said. In addition to taking her classes, Boschini also does course selection and has given clinical assignments through the speech pathology program in the Department of Communication Sciences and Disorders.

Boschini and Rachel Chaikof, the illustrator of the books, have been friends since meeting through the Alexander Graham Bell Association for the Deaf and Hard of Hearing on Facebook, Flahive said. Chaikof has a bilateral cochlear implant and attends the Savannah College of Art and Design as a photography major.

“Elizabeth is extremely passionate about her field of study and truly wants to make a difference in the lives of children”, Chaikof said.

A parent of one of Boschini’s former students at The Hearing School of the Southwest, Candice Bailey, said her son Blake has had the implants since he was 3 years old. Candice Bailey said it has been great that Blake reads the books with his family to friends so they can better understand his disability and implants.

Boschini has received a positive response to her book at deaf-related events, receiving e-mails of pictures of children wearing “Ellie’s Ears” gear and “Happy Birthday to My Ears” T-shirts on the day they receive their cochlear implants for the first time, Boschini said.

Boschini said the profits from the T-shirts are donated to Hear See Hope, a nonprofit organization that raises funds for research of a condition called Usher syndrome, a leading cause of deafblindness that affects both hearing and vision.

Boschini, who will graduate this spring, plans to earn a master’s degree in speech-language pathology and pursue a certification as a listening and spoken language specialist.