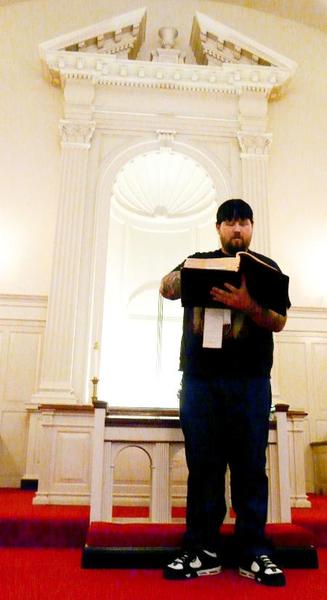 Brought to tears by the lifting of what he called an enormous weight on his heart, Andrew Weatherford said he prayed silently for forgiveness while the sins, self hatred and rebellion that had plagued his existence for years washed away in an instant.

Weatherford said the burden was so large that it knocked him and the prayer leader to the ground when he was touched.

“I fell down and I just remember staying there for a while – I didn’t want to get up,” Weatherford said. “But when I did, I opened my eyes and saw color where before my life had just been shades of gray.”

He describes his experience as being born again.

“I knew at that moment the old me was dead, and it was painful,” he said. “But it was real.”

Three years later, Weatherford is a junior religion major and pastor of the Deliverance Bible Church, a nondenominational Christian congregation in Fort Worth, and has full sleeve arm tattoos.

He might appear out of place standing on the steps of the Brite Divinity School, or reading scripture in Robert Carr Chapel, but at DBC he fits right in. Hair colors within the congregation span every color of the rainbow. There are piercings and mohawks and lots and lots of tattoos but most of all, Weatherford said, there is a sincere and deep-seeded faith and a sense of comfortable belonging that many at the church say they could not find anywhere else.

The church was founded in Hurst in 1999 and has since grown to include congregations in Grand Prairie, Denton, Deep Ellum and Houston. Weatherford’s Fort Worth congregation is the newest addition having opened in October this year.

The theology of the church focuses on a strict interpretation of the bible and teaches a mixture of what Weatherford calls both the wrath and the love of God.

Sitting front and center as Weatherford delivers a sermon on the love of God is Jeff Gray, the same prayer leader who has been there for him since the day he showed up at DBC unaware of where his life was going.

Gray said he witnessed Weatherford’s transformation from an addict living in sin to a confident, righteous spiritual leader who now stands up before his own congregation sharing a story about the stack of obituaries he keeps in his desk as a reminder of the harsh realities of the street and how close he came to becoming just another clipping in the pile.

“He looks really tough, and I think that once upon a time he was pretty hard core,” Gray said. “And he will sometimes preach the hellfire and brimstone because that is a big part of it, but deep down he is a big old teddy bear.”

Gray will soon be forming a new DBC congregation in Seattle, where he said he spent some time on the streets during his “B.C. days.” He said there is a serious need for outreach to people in Seattle who may be forgotten or unreachable by traditional churches.

“It’s nothing like Texas,” he said. “There are 12-year-old kids there on the street on heroin. It’s crazy.”

Both Weatherford and Gray said they are excited for the future of the church and look forward to exponential growth.

The Hurst location that began it all with a group of five meetings at a YMCA now has more than 150 members and operates a 24-hour prayer house.

Statewide, the DBC has close to 400 and the congregations draw new members every week.

Weatherford’s own congregation, which is renting space at an established church of the Nazarene on Friday nights, has established a base around 20 regulars and has welcomed new faces at every meeting.

“I can see us one day in a mega church with a congregation of 30,000,” he said. “Because our message is just that strong . it’s not pat yourself on the back and take your spiritual candy corn. It is the real living breathing word of God and that does things for people.”