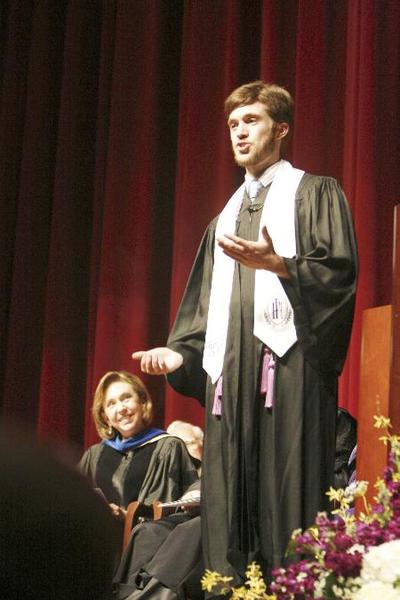 The summer Preston Swincher turned 22, his parents were out of town and he decided to throw a house party with a “few” friends to celebrate his birthday.

By the time his parents arrived home the next day, Swincher had the house back to normal, and his mother even noted how the house was cleaner than it was when they left, while his dad asked, “So, how was the party?”

In order to avoid making the same mistake again, Swincher asked his father the inevitable question.

Swincher, a senior entrepreneurial management and musical theatre major, honors student and first-ever student speaker at the Honors Convocation, spoke in front of about 400 faculty, students and parents in Ed Landreth Auditorium on Thursday,

His speech, “How the Internet Crashed Our Party,” addressed how the Internet in the digital age has reshaped the way people relate to each other, and perhaps most importantly how people fundamentally relate to the knowledge that humanity has placed on the Internet.

Swincher said that at an early age people are taught not to talk to strangers, but as social beings they need to converse and mingle with strangers in order to exchange ideas with minds that are informants to their own.

In response to the technological developments, the generation that was taught not to talk to strangers is posting private information on the Internet for everyone to see, Swincher said.

“Social networking is my generation’s cultural reaction to this,” Swincher said. “It’s our way of reaching out and creating our self-image by sharing ourselves with a world we have been meticulously and cautiously sheltered from.”

Swincher said one of the most unique manifestations of behavior that stems from social networking is “Facebook stalking,” and what Swincher said could also be defined as procrastination.

“We’re so busy, but ironically, we’re addicted to Facebook,” Swincher said. “I’d like to think every hour wasted on Facebook is just an indicator that we still care (about our friends).”

This social strength phenomenon is what Swincher said has become an Internet oxymoron.

People no longer need an institution to deliver the things we can now get on our own, he said. Peer-to-peer file sharing is threatening the recording industry, open source software is insulting Microsoft’s hold on the software industry, and Wikipedia is already beginning to replace most well-known encyclopedias, he said.

The Internet has given people an expectation that is driving their demand for a web-based world, and the economy and society are struggling to keep up, he said.

Just as ancient man began documenting his life on clay to keep track of it all, Swincher said our lives have become so complicated that we need technology to keep up.

“We’re going to live and breathe this technology until it becomes seamlessly integrated with our lives,” Swincher said.

As technology becomes literally, physically and semantically smaller it’s going to be that much easier to become engulfed by it, he said.

“My username on the Web is going to ditch the ‘name’ and I’m just going to be a user, because what’s in a name when the Internet is already going to know who you are,” Swincher said.

Desktop screen devices that let the user physically sort through electronic photos directly from their camera, or a small electronic devices worn around a person’s neck that can make recommendations for specific brands of paper towels are just a few examples, Swincher said, of how technology is becoming integrated into our lives.

“It’s like Minority Report, except instead of Tom Cruise, it’s for kids,” Swincher said.

Swincher said the line between what is real and what is digital has become so thin that society will not be able to discern the difference until it reaches out to touch it. And soon technology will cease to be a form of communication with barriers, he said, because it will become just as effective as talking to someone face to face.

Genevieve Lawson, a senior advertising/public relations major, said Swincher’s interpretation of how the Internet affects our world was dead on.

The free examination of the Internet can create transparency, and it is this clarity that Swincher said he hopes will allow humanity to unearth its mistakes and provide solutions.

“The Internet is drawing tight the wire that connects us all,” Swincher said. “And when we’re all standing shoulder to shoulder we will no longer be able to ignore the problems that face humanity.”