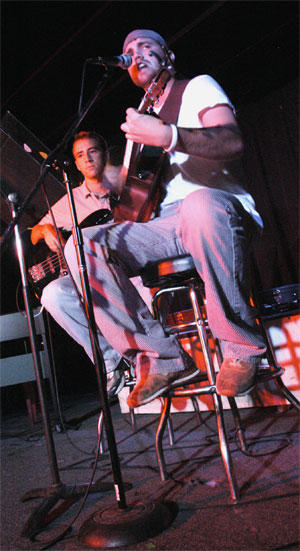 Standing on a hard, dirty cement floor in a smoky bar sounds like your average Saturday night on Berry Street. Hoards of college students happily dance about as mixed drinks are sloshed out of plastic cups onto the high heels of unsuspecting sorority girls. People crowd the bar, fighting for the attention of the bar tenders while the cover band jams loudly in the background and everyone sings along to hits by artists such as Billy Joel and Tom Petty.

Except this week it’s not Saturday night; it’s Tuesday night.

Senior Blake Martin is the artist everyone has crammed in to see. Martin, a marketing and finance major, has started filling local hot spot The Aardvark every Tuesday night with his upbeat renditions of old classics and modern favorites.

Martin said some Tuesday nights more than 200 people pack into The Aardvark to see him perform, and the crowd only seems to get bigger as the weeks go on.

“I go every Tuesday,” said Kristin Perkins, a junior psychology and advertising/public relations major. “Not much else is going on, but even if stuff was, people would be here. Blake is really good, and you can’t help but have fun when listening to him.”

Martin, whose obvious vocal and instrumental talent shines through despite playing covers, is modest about his start in the Fort Worth music scene.

Martin, who said he has loved music since the sixth grade, was part of a band in high school. After coming to TCU, a friend hooked him up with a solo gig Mondays and Wednesdays at Potbelly, and he was then asked by The Aardvark to come in Tuesdays to play.

Martin said the manager told him on his first night if between 30-50 people came, he could come back the next week. More than 200 people came, Martin said, and the management asked him to play every week until the end of October.

Martin said since his shows have been successful, he was asked to play through November as well.

As fans old and new keep flooding in, Martin tries to keep the shows original.

“I’m always looking for new songs,” Martin said. “If somebody requests one at The Aardvark or I hear it on the radio, I will check it out. If I don’t like it, I probably won’t play it. But we try to go in every Tuesday with about five new songs to keep it fresh and new.”

Martin writes his own music, though he acknowledges that is not always what his fan base wants to hear.

“I know that I am there to get people to have fun and not play my songs, but fun sing-a-long and dance songs,” Martin said. “I have finished a few songs and have a couple more always being worked on, but it is really hard to play, write and work songs all by yourself. It’s times like that I wish I had a band to work on those with.

“I have only played one (original) song, and it is more of a comedic/ satirical song. My other songs are pretty chill, with a Jack Johnson and Jason Mraz kind of feel.”

“I go every Tuesday night because they play songs that make me happy. In fact, this week I found myself dancing alone right next to the speakers just lost in the music.”

“Blake knows how to keep a crowd entertained,” Davis, a finance and psychology major, said. “It makes sense with his outgoing personality to be on stage. For me, it’s more fun than anything playing with him because we’re allowed to goof around a little bit while playing, and everyone seems to have a really good time despite.”

Martin said in upcoming shows people will see everything from Garth Brooks to Nelly.

“Really though,” Martin said, “I love all kinds of music.”

Martin said he has been asked to play at coffee houses, Christmas parties and other gigs over the following months.