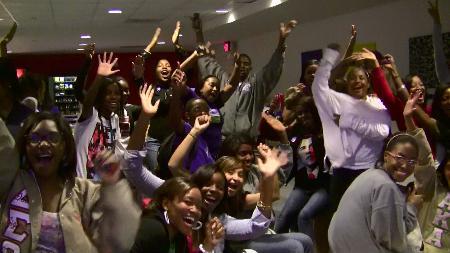 Students at the NAACP/Delta Sigma Theta watch party danced with excitement as the election was called in favor of Democrat Barack Obama while students at the Campus Commons watch party discussed what the new president would mean for the country.

Lauren Gray, a senior and president of Delta Sigma Theta sorority, said those in attendance at the party in the University Recreation Center were thrilled with the results.

“We’re so happy here at the watch party because there’s history in the making,” Gray said. “We would have been surprised if it went the other way because of all the support behind him.”

Attendance in the Campus Commons was sparse throughout the entire evening. However, a few students, such as sophomore speech pathology major Megan Herman, were still resting on the lawn as the electoral votes were tallied.

“I’m watching the election because it will decide the future of this country for the next four years,” Herman said.