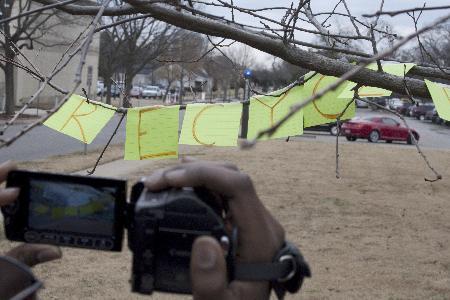 College students nationwide will have the opportunity to win grant money and prizes for their on-campus environmental sustainability efforts by participating in the National Wildlife Federation’s Chill Out: Campus Solutions to Global Warming video competition.

Jen Fournelle, campus programs director for the National Wildlife Federation, said the competition is meant to demonstrate a comprehensive campus view of environmental issues. She said the NWF is looking for “different ways to look at sustainability and engage students and faculty.” It’s also using the competition to encourage college-aged people to take initiative against global warming, she said.

“Youths are going to see the effects of global warming in their lifetime,” Fournelle said. “(Chill Out) is a great way to engage on a personal level, but also on a local scale within the college.”

Tom Calvert-Rosenberger, a sophomore environmental science major and president of the TCU Environmental Club, said the club will probably not participate in Chill Out this year, but he said it might be something that happens in the future.

“One of our main goals is to give awareness of what TCU is doing,” Calvert-Rosenberger said. “If somebody is making a video, they’re trying to spread the word, not only for campus, but for a group, and when you have a group effort, there’s a lot of solidarity.”

Keith Whitworth, professor of sociology and adviser of the TCU Society of Sustainability, said events like Chill Out are important because sustainability is a pressing topic across the board.

“(Sustainability) is a topic that we have to address in higher education because (students) are the future,” he said.

Unlike other video competitions, Chill Out does not just focus on individual skills, Fournelle said. She said the video contest isn’t about flashy production values, but rather about what campuses are doing to be more environmentally friendly.

According to the competition’s Web site, submissions could range “from clean energy to habitat restoration to awareness campaigns.”

Winners will be featured on the Chill Out national webcast.

Wood Turner, executive director of Climate Counts, a nonprofit organization that scores companies on their sustainability efforts and sponsors the event, said high school students are beginning to choose colleges based on the school’s environmental awareness.

“We hear from sustainability coordinators from across the country,” he said. “There’s strong and steady impact in this kind of activism.”

Turner said Chill Out is also an opportunity for college students to realize how much they can affect big business. He said students can change the minds of large corporations if they are active in the companies’ efforts toward climate change awareness.

“Students on college campuses don’t realize enough that they are coveted consumers by companies,” Turner said. “One of the biggest things (students) can do is come together as consumers and say it’s not a good idea to be involved with companies that are not focused on climate change.”

For more information on the Chill Out contest, including how to enter and what prizes are offered, visit nwf.org/campusecology.