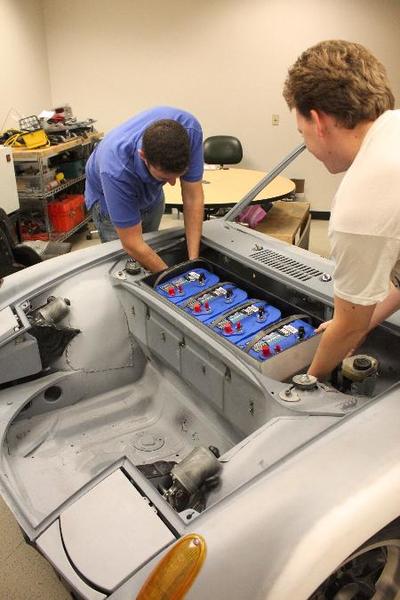 A group of engineering students is turning a $500 vintage Porsche purchased on eBay into the first electric car produced on campus.

Stephen Weis, professor of engineering, said he developed the idea of working on an electric car project in June 2007 with David Yale, a technical support machinist at the College of Science and Engineering . He said students are managing the building process of the car, a 1974 Porche 914 bought off eBay with funds from the Energy Institute, on their own.

Mike Murdock, another technical support machinist of the College of Science and Engineering, said he and the students wanted to build an electric car as an icon of the TCU engineering department. Once the project is done, students will drive the vehicle to car shows to showcase to local high school students.

Justin Hand, a senior mechanical engineering major, said this is the first electric car students have worked on at TCU.

Hand said students should be able to drive the car next April or May, but the project is open-ended so future engineering students can continue modifying the car. The best part about the electric car is it costs about five cents on electricity per mile, Hand said, compared to about 14 cents on gasoline per mile for a conventional automobile.

When the car was bought, it was dipped in chemicals to remove all rust, the deteriorated metal was cut out and new metal was welded over gaps in the body, Hand said. For the body of the car, students have smoothed out welding to create finished smooth surfaces, Hand said.

John Payne, a sophomore mechanical engineering major, said the engineering department is supportive by providing funds to pay for expenses related to the project.

Hand said the engineering department provided $4,500, and sponsors provided some parts for the car. The sponsors’ names will be painted on the car, he said.

Murdock said the car will have better quality parts, brakes and suspension, which will help it withstand the extra weight of the batteries.

“When the electric car is done it will be in better condition than a 1974 Porsche from the factory,” Murdock said, “except it will be run by electricity.”

Even though some electric cars produced in the past didn’t have appealing appearances, this one will just look like a 1974 Porsche, Murdock said.

“When you see the car, you will never know it’s an electric car,” Murdock said,

Payne said the only difference is people can’t hear any noise from the car because it’s run on electricity.

Hand said the most difficult part of the project is the time students have to put in it. Besides the busy schedule and tough classes, he said he spends about five to 10 hours a week on this project.