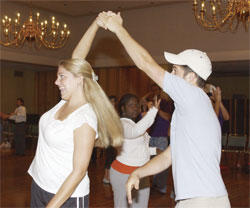 “Triple step, triple step, rock step” was one of the first swing dance moves that about 65 students learned in the Student Center Ballroom during a leadership course that occurs every Thursday night.Marcy Paul, director for the Women’s Resource Center, said she hopes the leadership class, which is offered for the next two weeks, will teach students mutual respect and trust for each other through dance.

Paul said the idea came to her after watching “Mad Hot Ballroom,” a documentary about elementary students in New York City who learn how to ballroom dance.

The class, which was made up of students of varying ages, cultures and genders, aims to help develop leadership skills through understanding gender roles and anticipating a partner’s needs, Paul said.

“We need to stop thinking about leadership as being the CEO of a company,” Paul said.

Chandler Smith, development director of the College of Fine Arts, taught the lesson with Shelton, chairwoman of the ballet/modern dance department.

Smith said it is important for the dancing roles to be defined. The person leading must remain the lead throughout the lesson, and it’s the same with the person following them.

Susan Harz, a freshman premajor, said she has danced since she was 8 years old and is taking the class to work on her dance technique and to meet new people.

Harz said that she is very open-minded about gender roles and agreed that it is important to have a strong partner.

“You have to be able to follow that person, or it doesn’t work,” Harz said.

Smith said students can also learn about relationships through dance.

“Dance proves to be a microcosm of all different relationships you have in your life,” Smith said.

Smith told students that he can tell whether engaged couples should get married by how well they communicate on the dance floor.

However, Bellows said, the instructors still have some issues to work out. The teachers had a problem with interrupting each other, he said, and they could have been clearer with the steps they were teaching the female participants.

Shelton said that swing dancing seems like a natural match for the leadership class, and while many students are skeptical about swing dancing at first, it is a good community building experience.