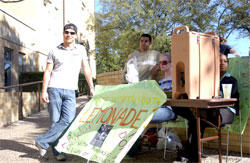 If life gives you lemons, then the marketing department is a good place to be.Bob Akin, a marketing professor, and his Selling and Sales Management classes are setting up lemonade stands at TCU and the surrounding area for class credit.

Akin has taught at TCU for four years and has presented this project to his students for the last three.

“About three years ago I was watching ‘The Apprentice’ and I decided to stop having tests,” Akin said. “These projects are a better way to teach someone how to sell something.”

Akin said each team of about four students is given $25 as seed money and all they have to do is make that money back.

For their first project, each team must set up a lemonade stand in the area of their choice.

Poynter, who set up lemonade stands as a child, said it’s not as easy as it sounds.

“We have to get people interested in what they are buying,” Poynter said. “We know that products don’t just fly off shelves.”

The Albertsons team charged 50 cents for a cup of lemonade and took extra donations.

Poynter said they made five times their money back in one hour at Albertsons.

Bobby Silber, a senior marketing and management major, participated in the lemonade stand project in the past.

He said he gained real life experience from the project.

“It really helped me to learn as much from my failures as my successes,” Silber said.

The profits made from the lemonade stands go to the Jim Bob Norman scholarship fund, a fund for 4-H Club and Future Farmers of America students who wish to pursue agricultural careers by attending college.

Akin said in other years of doing this and similar projects, his students have raised $60,000 for Cook Children’s Hospital and have raffled off Chancellor Boschini’s parking space.

Lemonade stands have also been set up in the Student Center, at baseball games and in city parks.

Akin said 80 students are participating in the lemonade stand project.

“This project really makes them see what it takes to run a business,” Akin said.