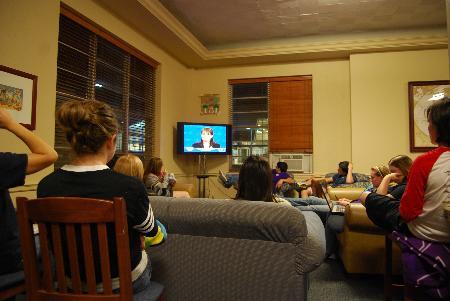 Students gave Republican vice presidential candidate Sarah Palin good reviews after she went head to head against Democrat Joe Biden on Thursday night at Washington University in St. Louis, Mo. in the first and only running-mate debate of the election season.

Coming into the debate, critics questioned Palin’s experience after she appeared misinformed about certain issues in a handful of interviews she granted to the media.

About 20 students gathered at Milton Daniel Hall for a debate watch party.

“It’s important for everyone to be politically savvy,” Poe said.

Most students believed both candidates were strong debators.

Poe said Palin did better than people thought she would, even more so because she has not been in the presidential race that long.

“She seems a little shaky,” Poe said. “But I’m impressed with how she’s doing.”

Jessica Latimer, a freshman biology major, said both candidates delivered strong debates, but where Biden came off as crude, Palin kept a nicer delivery by smiling and using simple language.

“That can come off like she’s not debating well,” Latimer said. “But she’s throwing just as many jabs and punches as Biden is.”

Tracy Cable, a freshman biology major, said neither candidate showed a stronger debate over the other.

“There’s never a clear winner in a debate, and there’s not one here,” Cable said.

Cable said it doesn’t matter to her who the better debator is.

“I’d rather look at the policies they support,” Cable said.