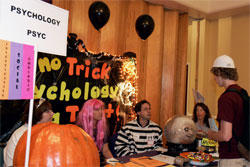 Students had access to faculty and staff from 36 different academic departments at the 12th annual Major/Minor Fair on Monday in the Student Center Ballroom.Outside the entrance to the ballroom, University Career Services set up a table with quick assessment tests so students had an idea of their strengths and career possibilities before going into the fair, said Jenny Cureton, assistant director of career advising.

“Some students really like it because they have no clue who to talk to when they get inside,” Cureton said.

For wandering students still needing incentive to stop by, several tables offered Halloween candy, and some volunteers even dressed in costumes reflecting their departments.

“We have the coolest booth at the Major/Minor Fair,” said Shanna Mittie, a graduate student from the psychology department who wore a long pink wig and the name tag “Pink Freud.”

Their goal, Mittie said, was to let students know how interesting and versatile a psychology degree can be.

“I think we generate a lot of interest,” Mittie said.

Kristina Keilson, a junior nutrition major, said she dressed as a skeleton to “show the importance of calcium and how much nutrition really does matter for your health.”

Keilson said she did not know nutrition was a major until she attended the Major/Minor Fair her freshman year.

One student attending the event already chose his majors but wanted to find out about different classes he can take to enhance his education.

James Russell, a freshman who is majoring in English, art history and religion, said he went to the Major/Minor Fair to learn more about the programs he’s not already taking classes in, and said there were many he found interesting.