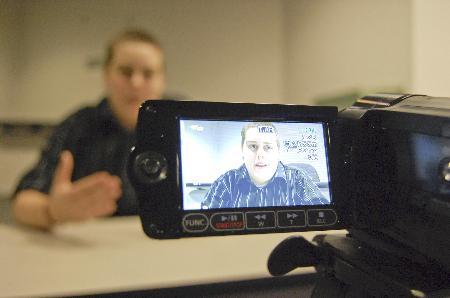 If sophomore social work major Shelly Newkirk could speak freely, she would ask you to look her straight in the eye and tell her what ‘educating individuals to think and act as ethical leaders and responsible citizens in the global community’ means to you. Or at least that’s one of the questions she asked in her video.

Newkirk posted a video on YouTube called “If I Could Speak Freely” about the frustration she feels with the lack of resources and support within the university for the lesbian, gay, bisexual and transgender population.

Newkirk said she met with Chancellor Victor Boschini on Feb. 20 to discuss the possibility of the university’s support in establishing an LGBT resource center that would offer counseling, a media library and a full-time director.

Boschini wrote in an e-mail that even though they did not agree on every issue, he appreciated hearing directly from Newkirk.

“I think we are actually doing much more than other places I have worked in that we are even discussing this issue in the office of the chancellor,” he wrote.

Boschini wrote that a resource center is already in place for LGBT students in the Office of Inclusiveness & Intercultural Services, and before his meeting with Newkirk he spoke to the director, who confirmed that the office is ready to assist the gay population.

Darren Turner, director of the Office of Inclusiveness & Intercultural Services, said the office offers the LGBT population what it does to all students, which includes organizations, support and a place to come together.

He said that the need for a resource center depends on what the needs are to the population and looking at how to accommodate that with IIS or creating a new space.

Newkirk said she and Su Harz, a junior social work major, developed an initiative, the Iris Reaction, with the ultimate goal of establishing a resource center and a full-time administrative position dedicated to maintaining a welcoming environment for the LGBT community.

Harz and Newkirk named the initiative for the iris of the eye, which lets light into the eye, and is representative of their efforts to raise awareness, Newkirk said.

Jeff Ferrell, professor of sociology and informal supporter of the Iris Reaction, said he believes the university shows an unintentional lack of support for the LGBT community, mostly because of the lack of education and understanding on the issue.

“The LGBT civil rights movement is one of the last battles being fought,” Ferrell said.

Newkirk said she has experienced some instances of discrimination, one being in a classroom where the topic of homosexuality came up last spring.

She said about one-third of the class began using homophobic slurs and said gay people were “gross” and that they all have AIDS.

Newkirk said she and two other gay students were in the class but none of them spoke up.

Other students in the class attempted to defend LGBT rights and stereotypes, but the students continued their commentary, she said.

“The homophobic voices were a lot louder than the [students’], but the professor did try to keep it under control,” Newkirk said. “The professor stayed after class to make sure we were OK.”

Lorna Runge, a sociology professor who calls herself “an on-staff lesbian” and active member of the LGBT rights movement on campus, said when university employees receive orientation on benefits, those looking for domestic partner benefits must stay after the meeting to find out information.

“There’s this requirement that you have to out yourself as a gay or lesbian person to get information rather than having it available like everyone else,” Runge said.

Runge said that although the university claims to offer benefits for same-sex couples, the benefits are separate from those of heterosexual couples, which further isolates LGBT employees.

Jenny Cureton, TCU Leadership Center coordinator and Allies member, said the risk of neglecting LGBT students’ can be that students end up leaving the university, dropping out of college or even taking their own lives.

Jamal King, a freshman education pre-major and openly gay student, said the addition of a LGBT resource center is necessary because it puts the university in a position to use its power and privilege to help the oppressed, like the Office of Inclusiveness and Intercultural Services is focused on ethnicity, religious and racial issues.

Newkirk’s three-and-a-half minute video has received more than 600 views since it was uploaded Jan. 27.

Newkirk and Gay-Straight Alliance officers, an active group for gay and straight students, will have a follow-up meeting with Boschini at the end of the month.