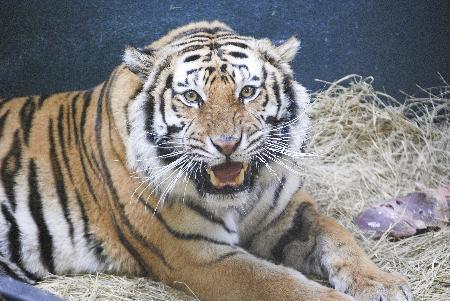 Students in a communication studies class are working to raise money to donate to a local shelter for the upkeep of abandoned animals.

Diane Stamper, an adjunct faculty member in the department of communication studies, said that as a part of her class, six students formed a group named Prestige Worldwide and began formulating ideas to finance the upkeep of a Bengal tiger named Hamilton. Stamper said the tiger was abandoned by a private owner in Hamilton County.

Charles Thompson, facilities manager for the Humane Society of North Texas, said the tiger was rescued in early February.

Thompson said the tiger weighed 250 pounds when he arrived and was in a severely malnourished state.

The tiger should have been around 300 pounds heavier, Thompson said.

“It’s a success,” Berk said. “Now he is going to a really great sanctuary where he can be himself. He’ll be on about 10 acres.”

Julie Leland, member of Prestige Worldwide, said the group was working on raising funds to cover expenses related to Hamilton’s food, medication and transportation to a new home, but the tiger was relocated before any ideas could be implemented.

But the student group hasn’t given up on their mission.

Leland said she has been in contact with HSNT about raising funds to help pay for the feed and care of 169 horses and 69 cattle that were seized by the shelter on March 5.

Ryan Myers, another member of the group, said collecting donations at baseball games is a possible way to raise funds for the upkeep of the horses and cattle.

Berk wrote in an e-mail that the horses and cattle were obtained in the largest cattle seizure in Texas history. She estimated that cost to feed and care for the livestock will be around $1,000 per day. She said she could not legally disclose the location from where the horses and cattle were seized until the custody paperwork is completed Friday.