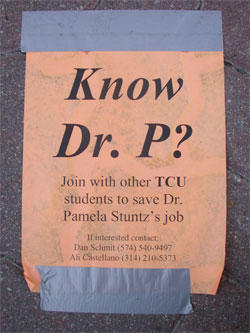 Though her future at TCU had been uncertain since the fall, a popular psychology instructor will teach again in the upcoming academic year.Pamela Stuntz, a full-time lecturer, has been the center of a petition circulated by junior Dan Schmit and sophomore Ali Castellano, both movement science majors.

“She’s a great person, a wonderful teacher and an even better friend,” Schmit said.

A new position has been created so Stuntz can teach as a full-time lecturer on a yearly contract, said Timothy Barth, psychology department chairman.

Barth said Stuntz was hired in fall 2003 as a temporary full-time instructor while the department searched for two permanent research professors.

When one vacancy was filled, Stuntz continued to work on a year-to-year basis at Barth’s request. But recently, a permanent replacement was hired to teach next year, filling the position Stuntz had been working.

In response, some students rallied behind Stuntz.

“She’s very involved with her students,” said Ryne Wilson, a junior biology major. “She really pays attention to the needs of students.”

According to TCU academic policy, Stuntz is not eligible for a tenure-track position because she is a TCU alumna. She received her bachelor’s, master’s and doctorate at TCU.

“She’s a fantastic teacher,” Barth said. “She is so willing to give time to students. Her teaching goes outside the classroom.”

Barth said he requested a full-time position for Stuntz every year, but due to budget constraints this year, Stuntz was not initially hired as a full-time instructor.

“I want to continue to teach at TCU,” Stuntz said.

In the fall, Stuntz said she declined taking on students for their senior honors theses and tutorials, two-semester-long research projects. When students asked why she couldn’t take part, Stuntz said she told them about her situation and students began writing letters on her behalf to administration.

Then Stuntz said Barth visited her office Wednesday afternoon to tell her the good news: She would receive a contract soon. Stuntz said Thursday she had the contract and intended to sign it.

Neither Stuntz nor Barth said they knew whether the petition worked on Stuntz’s behalf.

“I thought it was a wonderful thing to do,” Stuntz said of Schmit and Castellano’s petition. “They should be credited.”

Nowell Donovan, provost and vice chancellor for Academic Affairs, was unavailable for comment.

“The psychology department has not been at full capacity for three years so I’m fortunate to have a job next year,” Stuntz said.