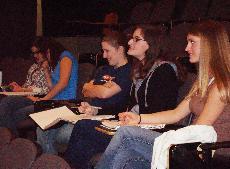 One group is ready to set the rumors straight about the first year of college: It is NOT high school.

Students, an alumna and other members of the community are organizing the production of a comedic “webisode” called “Not High School.”

A webisode is a new medium that streamlines episodes on the Web, the executive producer of the project said.

The fictitious Van Buren may seem familiar to students, said Hillary Benefiel, a senior English major. She warned that the webisode satirizes many institutions and organizations on campus.

“We don’t hate anyone,” Benefiel said. “We’re just poking fun. Just like our characters, people watching the show should be able to laugh at themselves.”

Rebekah Fear, an alumna and executive producer of the series, said the new medium is a new way to distribute her work.

Fear graduated in December with a degree in theater and radio-TV-film. After appearing as an extra in a Lifetime webisode, she said she was convinced she, along with her peers, could come up with something better. Fear said her friends came up with the premise for the show while sharing their own funny stories about freshman year.

“This is not the typical ‘American Pie,'” she said. “We are aiming to dispel the movie version myths and stereotypes about college life.”

The webisode will be shown on nothighschool.com.

Fear said a main goal of the creative team is to make the Web site interactive. The site will be linked to a pretend Van Buren University Web site and the characters will have Facebook profiles that the actors and actresses will be responsible for updating.

Jason Hernandez, a 24-year-old from Arlington who will play Dylan in the show, said he is excited about the innovative aspects of the project.

Hernandez said he heard about the project through a mass e-mail for actors in the area. He said he wanted to get involved so he could have experience in front of and behind the camera.

“This new media form is great for people who might not have a big budget but are not happy with what they’re seeing,” he said. “You get to do your own creative thing.”

Organizers said the creative team for the project is an eclectic mix of majors and personalities.

Benefiel, a member of the creative team and an aspiring screen writer, said many scenarios and character qualities included in the script were taken from personal experience.

“There are pieces of me in almost all of our characters,” she said, “especially in regard to their experiences with having very different opinions of the world than the people around them.”

Collin Duwe, a freshman theater major and actor in the series, said he hopes viewers will be able to relate to the characters.

“The real life stuff is always funnier,” he said.

With the exception of a $1,200 Undergraduate Research and Creative Activity Initiative grant, the project is completely student-run and student-funded, organizers said.

Fear said her production company, Know Fear Productions, is funding part of the project, but additional sponsorships are needed.

“The main problem (with advertising) is that old corporate giants are trying to appeal to our generation using this technology that we’re so familiar with, but they’re only motivated by money,” Fear said. “They’re trying to target our demographic when we are the ones who know what our demographic wants. So why don’t we try it out and see if we can be a little more successful than other people?”

Coordinators of the project said preproduction has begun for the first episode and shooting will begin soon.