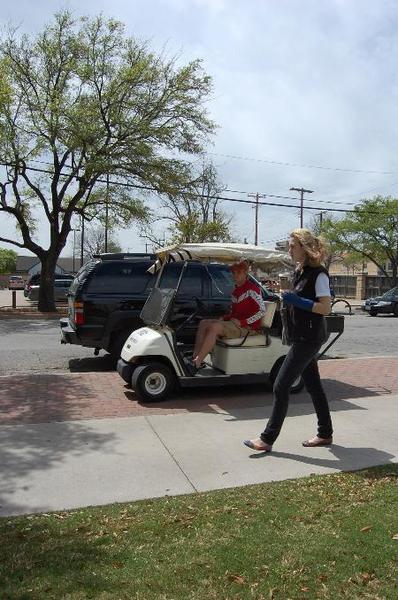 Students walking to class flood the sidewalks until the crowd is parted by a golf cart or a micro truck, causing them to either move to the grass or stop in their tracks. One group of political science students say they are determined to give the sidewalks back to the students.

Senior political science major Patrick Thomas said off-road vehicles, like the utility trucks the Physical Plant uses, pose a danger to pedestrians so the group is raising awareness of the issue by pushing legislation through SGA.

“What we’re trying to do right now is to keep the carts off the road during passing periods and I think if we get that, it’ll be a step in the right direction,” Thomas said.

The operating procedures section of the university’s policy on off-road vehicles outlines rules to ensure the safe operation of carts.

According to the document, “ORVs will park and not operate during scheduled class changes.”

The document also states that pedestrians have the right-of-way on campus and speed is to be reduced when approaching passing pedestrians and other ORVs.

Though the rules are clear, Thomas said they aren’t always followed. He said the goal of his group is to create further awareness of the issue, then to contact the Student Government Association for help in creating stricter provisions.

If the group succeeds in passing new legislation, they will join past groups who have improved aspects of the university and the community through the lab portion of the Practicing American and Texas Politics course.

Karen Anisman, associate director of the Center for Civic Literacy and facilitator of the lab, said that in the past, groups in this course accomplished changing the type of toilet tissue in the dorms and worked on research for the Fort Worth Transportation Authority on people who would use a commuter train that is supposed to be built to run through Fort Worth.

Student body president Kelsie Johnson said she believes the university’s administration would be open to the idea. Regarding enforcement, Johnson said she had spoken to Willett Stallworth, director of the Physical Plant, one of the departments that uses the carts. She said he told her he was reminding his drivers about the rules but could not speak for the other departments.

Repeated calls and e-mails to Stallworth were not returned.