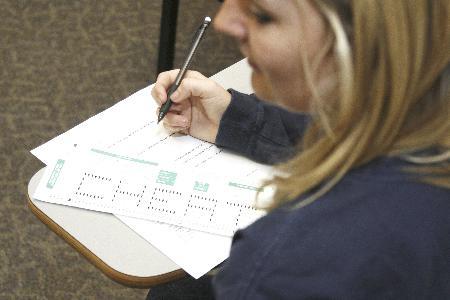 Surveys conducted at different universities including TCU show that business school students cheat more than students from any other academic discipline, a Rutgers University professor said.

Donald McCabe, organizational management professor at Rutgers Business School, said that when it comes to academic integrity, faculty and students are letting too much slide.

“Students will put blame on a teacher in saying they have too much of a work load, on the job market being so competitive, or you name it, they can find someone to blame,” McCabe said.

For the past 19 years, McCabe surveyed about 170,000 undergraduate and graduate students from 165 universities and about 18,500 faculty members at 115 campuses, he said.

In fall 2007, McCabe conducted his survey at TCU and said about 1,200 students participated.

Throughout his studies, McCabe said his findings at TCU were consistent with other results, which show that business school students cheat more than students from any other major.

Bill Moncrief, senior associate dean of undergraduate programs at the Neeley School of Business, said he thinks students in Neeley are not likely to cheat because of the severe penalties they face in getting caught.

“In the Neeley School we make it very clear cut about the consequences of cheating and have made examples of past students who have been caught cheating,” Moncrief said.

Moncrief said that depending on the offense, a freshman or sophomore student accused of academic misconduct will probably not be allowed to matriculate in the Neeley School. If the student is an upperclassman, he or she may be removed from the school, he said.

The consequences vary based on the occurrence, Moncrief said. Plagiarizing one paragraph in a 50-page paper will not warrant the same punishment as a cheat sheet or a stolen test, he said. If a student who commits academic misconduct is allowed to continue at Neeley or elsewhere in TCU, the event is noted in his or her file and a second offense would lead to major consequences with the university, Moncrief said.

Moncrief would not release the number of students in the Neeley School who have been caught or kicked out for cheating.

Sophomore finance major Collin King said a students’ major does not determine whether he or she is likely to cheat.

“I think that’s ridiculous to say business students cheat the most,” King said. “I think it depends on the type of person, not the type of major, that influences people to cheat.”

Sophomore economics major Andy Viehman said at prominent business schools such as Neeley, students cheat because of pressure to succeed.

“Neeley is such a good business school, so there is a lot of pressure for business students to do well, and you see more cases of cheating,” Viehman said.

Moncrief said students who cheat because of pressure from other students cannot use that as an excuse.

“Cheating shows a lack of integrity. Just because people around you cheat does not mean you should,” Moncrief said. “Neeley has a strict policy on cheating that I hope students aren’t willing to take a risk against.”