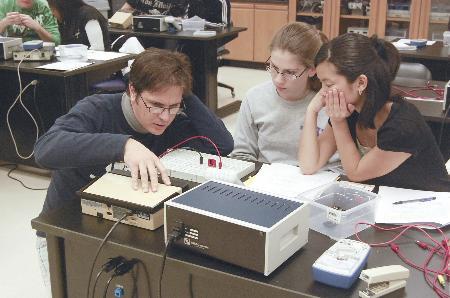 Engineering students can get applied professional practice as early as their freshman year, giving them valuable training once they enter the workplace, a university engineering professor said.

Despite a study that finds engineering schools too focused on teaching theory rather than real-world situations, the university aims to ensure a hands-on environment with students, engineering professor Stephen Weis said.

The study, conducted by The Carnegie Foundation for the Advancement of Teaching, examined 40 collegiate engineering programs and found their teaching methods, common at many of the 1,740 college-level engineering schools in the U.S., focused their attention on technical knowledge, with less emphasis on preparation for professional practice.

The report concluded that most schools fail to properly prepare students for the workplace. TCU was not one of the programs examined in the study.

Although the report noted that these practices were common among engineering schools, the university engineering program does not have the problems that other schools have, Weis said.

Weis, who specializes in electrical engineering, said the students get real-world experience as early as the first semester of their freshman year, along with other introductory engineering courses. The study stated that most schools do not have design projects until later in their collegiate experience.

“They actually do some experiments and projects on their own,” Weis said. “They start in teams of two or three, and they start working right then. There are many projects throughout.”

Some of the projects include working with several drawing programs on the computer, Weis said.

Patrick Walter, a mechanical engineering professor, said the school emphasizes labs to add to the instruction learned during classes.

“We spend a lot of time with hands-on activities,” Walter said. “If you look at the number of hours our students put in laboratories, you’ll find that our students have more laboratories than at other universities.”

Walter said the senior project, which requires seniors to spend an entire year working on a product or part for a company, gives students direct professional practice for the workplace.

Although not as large as the senior project, students take part in numerous projects in order to ensure students understand how to work as a team, Walter said.

Devon Clark, a sophomore mechanical engineering major, said along with the lessons and labs the students work on throughout their courses, the professors’ help put a face behind endless equations.

Clark said the small class sizes and the availability of the teachers are major reasons she preferred the department compared to other schools’ programs.

“You can have a teacher that stands up there all day long saying, ‘These are equations,'” Clark said. “Until a teacher can say, ‘This is how the equation is used in the real world,’ then that’s where it actually helps.”