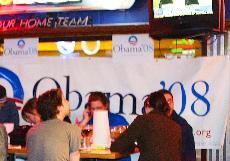 The winner of the Democratic primary in Missouri and the spelling of Brian Young’s name were updated at 10:53 a.m. Wednesday.

The big wins came for New York Sen. Hillary Clinton and Arizona Sen. John McCain in the Super Tuesday primaries, but they still have a long way to go before the nominees are set in stone.

“For one thing, the results of Super Tuesday tell us that the end is not here yet,” said Wright, a political science faculty member. “The decision could go to August as it has in the past.”

Depending on the direction the Democratic nomination is taking as states continue to hold primaries, Texas could become a major influence, said Jim Riddlesperger, a political science professor.

“The Texas primary could be important in the Democratic Party in a way that it has not been in years and years,” Riddlesperger said.

Cathi Hoag, an alumna, said she thinks Texas will benefit from a later primary.

On campus, students were also taking in the excitement of Super Tuesday. Chi Omega sorority and Pi Kappa Phi fraternity hosted a watching party in the Pi Kapp house, where about 30 students attended. Although there was one Huckabee supporter present, the majority of students seemed to be in favor of Obama.

Students for Obama, a campus group, took over Fuzzy’s Taco Shop on Berry Street, covering the walls with “Obama ’08” posters and tuning every TV in to CNN or MSNBC. About 60 people came and went throughout the night, said Brian Young, a coordinator for the Students for Obama party.

Melanie Harris, another alumna, said she attended the Students for Obama party because there were no Clinton-watching parties. She said Obama should be careful with his support from young people.

The key to this election has been the enthusiasm of the candidates, Wright said.

“Both parties are responding to the call for change and people are excited about it,” Wright said.