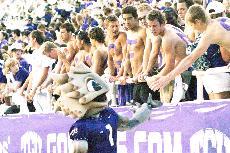 The members of the football team will not be the only ones chasing a championship this fall. SuperFrog was selected as one of 12 mascots to compete in the 2009 Capital One Mascot Challenge, a contest in which college football fans vote for their favorite of the bunch.

SuperFrog will compete for the ultimate mascot prize this fall with Bearcat from Cincinnati, Big Red from Western Kentucky, Bill from Navy, Boomer from Oklahoma, Bucky from Wisconsin, Butch from Washington State, Hairy Dawg from Georgia, Jack Rabbit from South Dakota, Mike from LSU, Sebastian from Miami and Testudo from Maryland.

Each mascot has its own profile page on the competition’s Web site that contains must-know information, like that Sebastian is 6-foot-9, making him “Eye to eye with linebackers,” or that Bearcat’s training regimen consists of “Tai Kwan Kat and Bear Don Jo.”

The 6-foot-6, 215-pound SuperFrog, in his rookie year on the challenge, trains by doing the Frog-leg press and eats pizza with anchovies, worms and ants as a pre-game meal.

Every mascot is paired with another each week and whichever mascot receives the most votes that week will receive a victory. After 11 weeks the mascots with the best 8 records will advance to the playoffs and will be seeded 1 through 8 according to their records.

The playoffs start on Nov. 16 and end on Dec. 14. The winning mascot will be announced during the Capital One Bowl on Jan. 1.

Each school whose mascot was selected to participate in the challenge received $5,000 to use in scholarships and in the funding of its school’s mascot program. The school of the winning mascot will get an additional $15,000 in scholarship funding.

SuperFrog is just the second mascot from Texas to compete in the mascot challenge, following Baylor’s Bruiser. SuperFrog is also the third mascot out of the Mountain West Conference to participate, following The Bird of the Air Force Academy asand BYU’s Cosmo.

Recent champions include Butch T. Cougar from Washington State in 2006, Zippy from Akron in 2007 and Cy from Iowa State in 2008. The only mascot to win multiple times was Monty the Grizzly from Montana, who won in the inaugural year of 2002 and again 2004.

Voting started on Monday at www.capitalonebowl.com.

What: Superfrog vs. Bucky the Badger from Wisconsin