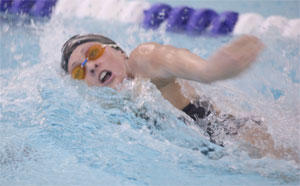 The TCU men’s and women’s swimming and diving teams competed this weekend in meets against Air Force and Nevada-Las Vegas at the University Recreation Center.The women’s team defeated the Falcons 143-91, but the men’s team lost 121-120. The women improved to 2-1 in conference play, and the men dropped to 0-2.

The men’s competition was not decided until the last event, the 400-yard relay. The TCU men trailed 115-109 but gained 11 points when the team of junior Yousif Del Valle, senior Diego Palacios, senior Teylor Arboleda and sophomore Jonathon Berrettini won first place. The Falcons, however, finished second and third and sealed the victory by gaining six points.

Both teams will be back in action at 5 p.m. Friday against Centenary, McMurry and Texas-Permian Basin at the Rec Center.