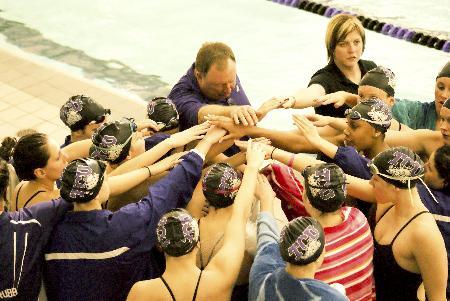 Tapering, or peaking, has been on the minds of the coaches and members of the men’s and women’s swimming and diving teams the past few weeks-and with good reason. The Mountain West Conference Swimming and Diving Championships begin Wednesday in Oklahoma City.

The goal for both the men’s and the women’s teams is to finish in the top three in the conference, Sybesma said.

“Both our teams are doing really well and if everybody does what they’re capable of doing we’ll have an opportunity to do that,” Sybesma said.

Each team has performed well in the spring semester.

After suffering setbacks on the road at the University of Nevada, Las Vegas in the first meet of the new year on Jan. 6, each team went on to post undefeated records in the matches that followed.

The men have topped Utah, Centenary and the University of the Incarnate Word.

This meet will likely be the last for the senior members of each team. This senior class is the first to spend all four years in the Mountain West Conference.

“It’s very bittersweet,” said senior swimmer Sarah Bardwell. “I kind of get choked up every time I think about it. I’m going to try to make the last one the fast one.”

Bardwell said the women’s team has a chance to place higher in the championships than it ever has before.

Senior Jason Hauck said his last meet with TCU will be emotional.

“Swimming’s a big part of my life,” Hauck said. “I just can’t really imagine what it’s going to be like not swimming at TCU.”

Senior diver R.J. Hesselberg, the Mountain West Conference Men’s Diver of the Year in 2008, said he hopes to eclipse his performance from last year’s Championships when he won gold on the three-meter springboard and silver on platform.

Though individuals have a chance to perform well and qualify for future meets like the NCAA Chamionships, Sybesma said the four days of competition in Oklahoma City are all about how the teams perform as a whole.