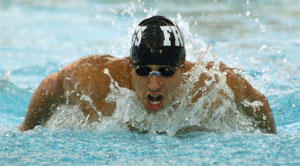 Head swimming and diving coach Richard Sybesma said the team’s leaders need to step it up this weekend even though the team has swam well recently.The team will swim in an exhibition game against Centenary, McMurry and Texas-Permian Basin on Friday before Saturday’s meet against conference rival Wyoming.

“This weekend we mainly need our upperclassmen to step it up,” Sybesma said. “It will give us our best chance to do well (on Saturday) with our freshman still going through a bit of a learning process right now.”

Senior breaststroke swimmer Allan McCallum said Friday’s meet will give the team a chance to evaluate its swimmers before facing Wyoming.

“Friday is more of a tune-up,” McCallum said. “It also gives us another chance to win and gives us a chance to see who else can swim.”

Last weekend’s meet resulted in a couple of new records for the school that had stood for more than a decade.

The Horned Frogs have captured five of the eight weekly awards issued by the conference this season. Last weekend’s meet also resulted in a couple of new records for the school that had stood for over a decade.

Senior butterfly swimmer Meredith Loechle said the exhibition will provide more of a break than last week’s meet did.

“It gives us a chance to have fun and have a nice break before we have to get up and race again on Saturday,” Loechle said. “Last week was tough because we had to go back to back without much rest in between.”

She also said Wyoming will be a good challenge for the team Saturday.

“I’m excited to race Wyoming,” she said. “They’re a good team but we’re ready for them, and I think our chances are really good as long as we support each other and swim like we can.”