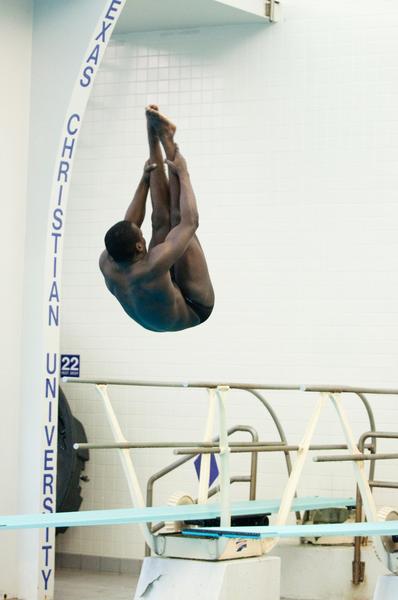 TCU’s swimming & diving team will compete in a dual meet against New Mexico and BYU at 6 p.m. Friday at the TCU University Recreation Center Natatorium.

It’s TCU’s second-to-last home meet of the season before the Mountain West Conference championships are held in Oklahoma City, Okla.

TCU coach Richard Sybesma said he hoped the sweep against Utah would build the team’s confidence as the Frogs head into the final stretch of meets before the conference championships. While Sybesma has previously talked about tailoring practices and training to set up the Frogs to peak during the MWC Championships, Friday’s conference meet still has plenty of significance regarding the standings.

The Frogs are seventh in the MWC standings while the Lobos are in eighth place. BYU is second in the standings with an overall record of 6-1 (4-1 MWC).

The Frogs swept Utah in their last meet as the men tallied a 171-123 win and the women’s team scored a 166-131 victory against the Lady Utes.

Senior diver Kyle Callens broke his own school record in the 1-meter springboard with a score of 360.98, and freshman Amanda Vincent swam a 2:02.69 in the 200-butterfly 8212; the fifth-fastest time in TCU history.

The Frogs won 12 of the 16 events, while junior Edgar Crespo, who practiced out of water last week because of a lower leg infection, added two more wins against Utah in the 100- and 200-breaststroke.

“TCU is a tough place to win at,” BYU head coach Tim Powers said in a Cougars’ news release. “They’re going to be very hard to beat at home. They put a lot of stock into this meet and are very competitive, but we are preparing for that and will be ready to compete when we get there.”

The Frogs should expect strong showings from BYU’s Jake Taylor, Brandon Watson and Dayna Christensen 8212; all of whom were Mountain West Conference Swimmer and Diver of the Week award recipients.

As for New Mexico, the Lobos’ diving squad hasn’t competed since the Arizona Diving Invitational in November.

vs. BYU and New Mexico