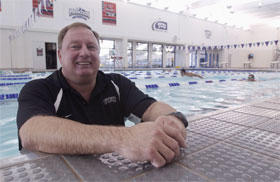 Head swimming coach Richard Sybesma has been a part of the TCU community for 27 years – longer than the football, baseball, basketball and soccer coaches combined.In those 27 years, Sybesma has brought a number of championships and national acclaim to the TCU swimming and diving program.

But championships aren’t what keep Sybesma coming back.

Forming lasting relationships with athletes that transcend their time at TCU is what he says he treasures.

The year before the 2002 Olympics in Salt Lake City, Sybesma carried the torch through the TCU campus in memory of a former swimmer, Matt Walters, who swam at TCU from 1988-1992.

Walters was a Web site designer for the 2002 Winter Games but died of a heart attack in March 2001.

The torch, which hangs in Sybesma’s office, is a constant reminder of the honor bestowed upon him.

“That’s pretty cool, huh?” Sybesma said. “Looking back, I think I tried to be a little too professional.”

Sybesma said there were some things, looking back, that he would have liked to do in the moment.

“If I had it to do over, I would have a little more fun with it,” Sybesma said. “I’d savor it a little more.”

It wasn’t Sybesma’s first Olympic experience. In 1996, Sybesma took Walter Soza to the Summer Olympics in Atlanta because Soza went to swim for Nicaragua and did not have a coach.

Sybesma said he was honored when Soza asked him to go.

“I’ve been blessed,” he said. “As a coach, I just had an opportunity to do what very few coaches get to do.”

Relationships like these keep Sybesma coming back year after year.

“I feel like I have a good relationship with the athletes on the team,” Sybesma said.

The administration also has an affect on his experience at TCU.

The TCU pool takes up a lot of her dad’s time, but Sybesma’s daughter, Katy, said she couldn’t imagine her father doing anything else.

“My favorite part of having my dad as the swim coach when I was little was being able to learn how to swim from him,” Katy Sybesma, now a junior at TCU, said.

She admitted she did not get to spend as much time as she would have liked with him, though.

Katy Sybesma said it amazes her that her father has been coaching at TCU longer than she’s been alive.

“You can tell he truly loves what he does,” Katy Sybesma said.

Junior swimmer Aran Bean said Sybesma is one of the reasons he decided to come to TCU.

“I knew I was going to come to the States to swim,” said Bean, a native Australian. “Coach was very professional and compassionate.”

Bean said Sybesma will sing to get the athletes’ spirits up.

Senior swimmer Brent Norcross said part of what makes his relationship with Sybesma genuine is that Sybesma treated him like the inexperienced freshman that he was; he had to go through that first year to appreciate where their relationship is now.

“By the time you’re done, you have shared so many experiences,” he said. “Now I can say that we’re friends.”

After helping Sybesma with the summer swim camps offered, Norcross said that coaching with his coach is a new experience.

Sybesma has also coached swim clinics in other parts of the world, such as Bahrain, Saudi Arabia, Malaysia and Borneo.

The clinics, which were part of the U.S. Sports Academy, introduced coaches to techniques they could pass along to their teams.

“That was an experience,” Sybesma said about the difference between the two cultures.

“In one week, five people were beheaded,” he said of the headlines.

Sybesma said the culture had as big of an effect on him as his interaction with the coaches.

When Sybesma had interaction with children directly, he said there was a bigger response when he got in the water.

Sybesma said that was more exciting to the children than just going through the motions.

Personal rewards like these mean more to Sybesma than the awards in his office, including the Athletic Department Teammate of the Year award he received last year.

Sybesma has been honored as the Coach of the Year four times. In 2004, he received the honor after leading the Frogs to a conference sweep. He received the Conference USA Student Athlete Advisory Committee’s Coaches Award, which is voted on by student-athletes around the conference.

“These are from people you see every day,” Sybesma said. “The big awards mean more when you’re younger, but awards like these mean more to me now.