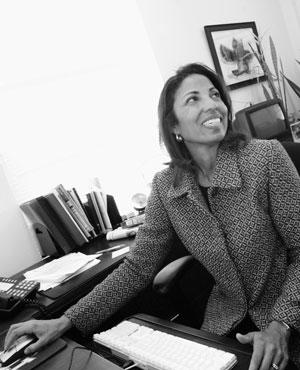 Vice Chancellor for Marketing and Communications Larry Lauer recommended Syler-Jones for the position based on her work ethic and dedication as director of communications, where she revealed her potential for advertising and marketing.

“She deserves this promotion,” Lauer said. “Tracy has been a very effective member of our staff and has become well-known as a representative of our program to all segments of the university.”

Chancellor Victor Boschini approved Syler-Jones’ promotion and described it as one of the easiest decisions he ever made.

“She has great instincts and knows intuitively what would be the best way to react to just about any situation,” Boschini said. “She is a very hard worker who works smart and deserves everything she has achieved.”

Since July, and continuing through July 2006, Syler-Jones has served as Boschini’s first intern in the newly implemented intern leadership program at TCU, which was modeled after the American Council of Education’s Fellows program.

Syler-Jones said such duties as working in the chancellor’s suite two days a week, attending activities in which the chancellor participates, and assuming membership in the Chancellor’s Cabinet enhanced her ability to communicate and helped prepare her for her new position.

Along with her broadening responsibilities, Syler-Jones is tackling new technologic advances at TCU such as RSS (Really Simple Syndication or Rich Site Summary), a format for distributing news headlines and other content on the Internet.

Syler-Jones said RSS news feeds are new to TCU and universities across the nation and are “marrying technology” to change the way people get their news.

“It’s a standard piece of technology,” she said. “We as citizens will become informed as we don’t have time to sit around and read the newspaper. This is media relations in the new world.”

Although the book is not published yet, she is looking to donate the book to the mentor program.