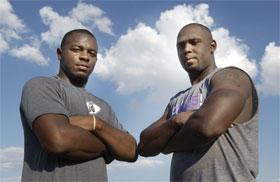 When there is thunder, lightning is soon to follow. The same can be said about senior tailback Lonta Hobbs and junior tailback Robert Merrill.

Hobbs described himself as a straightforward runner.

Merrill considers Hobbs to be a power runner, but considers himself to be the exact opposite.

“Slasher,” Merrill replied when asked about his running style. “But I am nothing without my offensive line,” Merrill said with a smile, turning to starting center Stephen Culp.

Hobbs began his career by setting many new rushing records at TCU. He rushed for 1,029 yards and 12 touchdowns and was named Conference USA’s Freshman of the Year.

During Hobbs’ sophomore season, however, he injured his ankle against Vanderbilt, and Merrill became the starter.

Hobbs and Merrill have both had successful seasons, but never in the same season. This year they will be counted on to have a great season together, said head football coach Gary Patterson.

“We need to run the football to win football games,” Patterson said.

After two injury-plagued seasons, Patterson said Hobbsis as healthy as he has been the past two seasons.

“Lonta will play a big role in this year’s offense,” Patterson said. “I hope he has the best season he has ever had his senior season.”

Hobbs said he also expects to have a strong year.

“You always expect to do well,” Hobbs said. “I want to go out my senior year in a bowl game with another ring.”

Merrill said he expects Hobbs to be successful as well.

Hobbs said he has worked all spring and summer for his senior year.

“I am very healthy,” Hobbs said. “I have hit the weights hard. I am a senior, and knowing the offense, I expect to make plays.”

All of the success for Hobbs and Merrill has made them work harder, Hobbs said.

“When you are not doing so well, you have to push through it,” Hobbs said. “It is part of life. Do whatever it takes on and off the field.”

Merrill said humility made him continue to step it up.

“Whenever success is around, you have to stay coolheaded,” Merrill said. “You never know when success is going to be taken away. You just have to go after it.