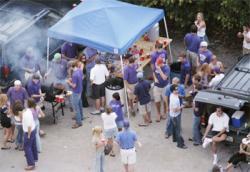 “We want to start the tradition of TCU students partying together before the game and then attending the game together,” Mills said.

Starting Thursday, the turf practice field will be open two hours before and after the home football games for a student tailgate party that will include free soda, food, face painting and more, said Hyperfrogs president Kennedy Shuler.

With their ID, students who are 21 may bring their own alcohol.

TCU Police Chief Steve McGee said the issues involved drinking in excess before the games and distribution of alcohol to minors, which is a Class A misdemeanor in Texas.

“What we want is for people to just watch the game,” McGee said. “People forget that what’s most important is to be supportive of the football team.”

Students had mixed reactions about the new tailgate.

Students Lindsey Spicer and Rachel Farris said they do not like the idea of a student tailgate party,and think it will drive students to have house parties instead.

Spicer, a junior fashion merchandising major, said she understands the problem with underage drinking at tailgates, but said the new style will be too restrictive.

“The regulation just makes the experience more stressful than fun so that no one wants to be there,” Spicer said.

Spicer suggested regulating drinking by checking IDs as students entered the tailgate parties and giving them a wristband to wear.

Mills said students will be required to show their IDs if they choose to drink at the student tailgate, but police will not go check individual IDs unless a student’s behavior draws attention.

Farris, a senior mathematics major, had an additional complaint that a student tailgate party would prevent her from “tailgate hopping” to see friends from different groups.

“A campuswide tailgate just seems ridiculous,” Farris said, “like it’s not a tailgate at all.”

Mills said the practice field is big enough for each organization to set up its tables in different areas, allowing students free movement from one group to another and a community feel.

Shuler, a senior psychology major, said that even though Hyperfrogs is devoted to supporting athletics without mind-altering drugs, she does not mind partying among students who are drinking.

“The most important thing is that we are all together building community, having fun and getting excited for the game,” Shuler said.