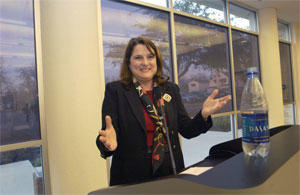 In order to get ahead in the business world, students should have tenacity, believe in themselves and be frugal with their money, a leading businesswoman said Wednesday night at a meeting hosted by the CEO Club.Nancy Tartaglino Richards, the founder and chairwoman of three different companies, told about 60 students how she worked her way to become the owner of the fourth largest woman-owned business in Texas.

For all three companies that she founded, Richards said she, “saw a pocket that needed to be filled, wanted to help existing businesses and thought that her company could do it better than the others.”

Upon graduating from Baylor University and receiving a liberal arts education, she decided to go to law school. After a year of studying law, Richards went into the real estate business, which launched the idea for her first company, First Preston Management, she said. From there she formed Home Tracker and Bid Select, two secondary businesses used throughout the nation by others in her industry to help keep an eye on the real estate market.

Richards explained to students that through her experiences, she has learned the best way to get a company noticed is to “get out there, hustle and get your business in the door.”

Students who attended the meeting said they found her information insightful, including Marlin Gusman, a member of the board of CEO Club and senior history major.

“Richards is very important, and definitely a pioneer in her field and community. She is a role model for aspiring businessmen,” he said.

Richards told students, “You are a generation that has a chance to change the world.

“You only get one shot at a first impression and one shot at a reputation,” Richards said. “Hiring the best and the brightest people in each field is important to helping your business get ahead.”

Richards said she is currently in a “transitional phase.” She said she has decided to be more involved in philanthropic work within the community as well as cultivating two ideas for new companies.

“We have many students interested in real estate, and having a woman speak helped put a new spin on the topic,” Mattison said.