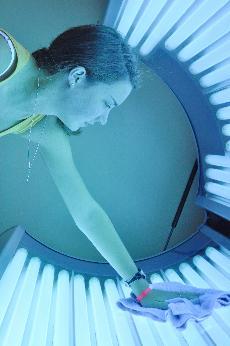 Students who tan may be feeling the burn after a study published in medical journal The Lancet Oncology found that using tanning beds before age 30 increases a person’s chance of developing cancer by 75 percent.

Despite these findings, local tanning salon owners said they have seen little change in the tanning habits of their college clientele.

Jeff Robinson, owner of Perfect Glow Tanning Salon on Bledsoe Street, said he has seen almost no change in business since the results were published in the August issue. He attributes this to the fact that the knowledge of the harmful effects of ultraviolet radiation is nothing new.

“I think there was a general awareness that there is risk associated with (ultraviolet) tanning,” Robinson said. “There have been reports periodically about this, so I don’t think it’s any big surprise.”

Wes Partin, owner of Baja Sun on Donnelly Avenue, said he also has seen little impact from the study. His salon, which he estimated sees 50 to 60 college students a day, has only had a couple of cancellations since the release of the results, Partin said.

In the study, 20 scientists raised the classification of ultraviolet-emitting tanning devices to Group 1, the International Agency for Research on Cancer’s rating for substances or devices considered “carcinogenic to humans.”

Stefanie Klaudt, a sophomore nursing major, said the study made her think before using tanning beds, but that she will continue to use them.

“I’ll try to cut back whenever I can, but I won’t completely cut it out,” Klaudt said.

Amelia Wenzel, a junior broadcast journalism major, also said she has made an effort to tan less frequently. She said her aunt, who used tanning booths at her age, has been diagnosed with melanoma and warned her to stop. Wenzel acknowledged the risk she takes by tanning, but said that she is not very concerned about it for now.

Young people feel pressured to look tan because of the media, Wenzel said.

At the suggestion of her aunt, Wenzel said she now tries to mix up using tanning beds with spray tans.

Partin said he has seen a slight increase in the amount customers who are concerned about the risks associated with tanning beds and switch to spray tanning, the ultraviolet radiation-free alternative.

Overall Evaluations of Carcinogenicity to Humans

Source: Journal of the American Academy of Dermatology, March 2007