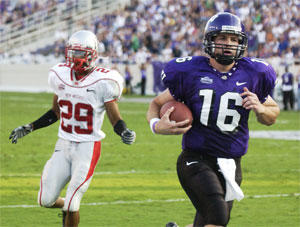 The Horned Frog football team continued its dominance over Mountain West competition with a 49-28 victory over New Mexico on Saturday.Junior quarterback Jeff Ballard, starting for an injured Tye Gunn, came out and proved that he belonged with the starting unit.

Ballard not only had success in the air, going 16-28 with 192 passing yards and no interceptions, but he also did his best impersonation of freshman tailback Aaron Brown, rushing nine times for 83 yards and four touchdowns, including a 56-yard run for a score.

“I don’t know if many other quarterbacks have had that kind of game in their first start,” head coach Gary Patterson said. “For Ballard not to throw an interception – that’s unbelievable. They were blitzing from everywhere.”

Brown continued his emergence in the backfield, gaining 130 yards on 14 carries. Brown broke a 73-yard run late in the fourth quarter, helping seal the game for the Frogs.

Patterson said he has gotten used to his team making big plays down the stretch.

“We’ve played good under pressure in fourth quarters this year,” Patterson said. “We’ve made some mistakes, but they stay out there battling. We come to play in the fourth quarter.”

The defense stepped up for the Frogs, intercepting four passes, forcing two fumbles and sacking the quarterback four times.

“I’m happy with my defense about that,” Patterson said. “A lot of players made plays out there.”

Sophomore defensive end Tommy Blake had seven tackles and one sack. Blake said he still has some things to improve upon before the Frogs next game at Wyoming.

“I need to work on some small things that I’m sure coach will tell me about this week in practice,” Blake said. “I can’t really say anything too specific right now.”

Patterson said the team will definitely be working on its punting game this week. The Frogs had a punt blocked by the Lobos.

“We can’t have the other team blocking our punts,” Patterson said. “We may get out there (after this press conference) and work on punts to make sure that doesn’t happen again.”

New Mexico did a good job of containing junior return man Cory Rodgers, coming off a game against Brigham Young where he returned a kickoff for 100 yards and a touchdown. Rodgers failed to return a punt or kickoff longer than 24 yards.

“We just have to go back and watch some film,” Rodgers said. “A little of that is on me, because I know I missed a big cut at one point. I have 100 percent confidence in my kickoff return unit, and I look forward to next week and hopefully being able to break one.”

Patterson said the team will now shift its focus to Wyoming and said he know the atmosphere in Wyoming will be a difficult one to play in.

“It’s one of the toughest places to go to and win,” Patterson said. “They’ve only lost one game there in four seasons.”

Rodgers said he is looking forward to playing on the Cowboys’ home field.

Patterson stressed the importance of preparing for each game as hard as the previous game, no matter who the opponent is.

“The next six ball games will be tough,” Patterson said. “There are no handouts in this league. Every ball game, you better come play or else you’re going to get beat.”