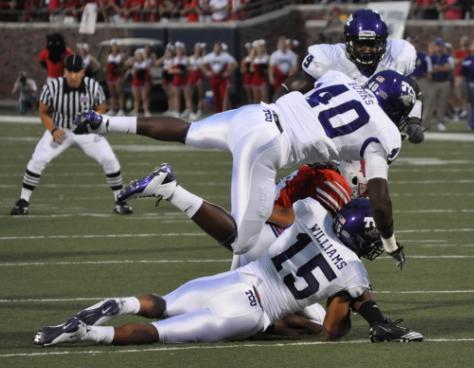 The Battle for the Iron Skillet was heated Friday night as No. 4 TCU defeated cross town rivals SMU 41-24 in front of the largest crowd at Gerald J. Ford Stadium.

The first half ended with the Horned Frogs leading 14-10 but, after half time the Horned Frogs came back and made the plays to take the win. The Frogs had a short week to prepare after taking in-state rivals Baylor the week before.

“That was an emotional rivalry,” Head Coach Gary Patterson said.“We played them back to back, Baylor and SMU.”

TCU Quarterback Andy Dalton came into the game against the Mustangs after a strong performance against Baylor last week, but during the first half Dalton threw an interception and several incomplete passes Friday night.

In the Frogs first drive Dalton threw two incomplete passes, the same amount he missed during the entire game against Baylor. The scoreless first drive broke the Frogs streak of earning touchdowns on the first possession of the past two games.

Dalton continued making incomplete passes throughout the first quarter and the Mustangs were able to make plays out of the Horned Frogs mistakes.

SMU running back Zach Line was a powerhouse for the SMU offense and was able to push through the TCU defense early on in game. The Mustang offense kept pushing through the Frogs leading SMU to the first touchdown of the game.

The Frogs first true drive of the game came with three minutes left in the first quarter when Dalton passed to Evan Frosh for a total of 31 yards. The drive continued with a 25-yard pass by Dalton, bringing the Frogs into the red zone for the first time during the game. The Frogs made it out of the first quarter with a tie against the Mustangs.

Ed Wesley took a tough tackle by the Mustangs during the second quarter and was out for the remainder of the game. Red shirt freshman Waymon James came in the game in place of Wesley and finished the game with two touchdowns.

Patterson said James came out and accomplished what he wanted back up players to accomplish.

“Every year I talk about when guys have to come in and play, back up guys, that’s how you win championships,” Patterson said.

The Horned Frog offense maintained the ball throughout most of the second quarter and drove the ball to score their second touchdown of the game.

The Mustangs intercepted a pass by Dalton at the end of the second quarter and drove the ball to the 25-yard line. The Mustangs punted for a field goal and strengthened the gap between the Frogs.

The third quarter started high in action for both teams but the Horned Frogs started out with a mistake. Dalton threw his second interception of the game and the Mustangs made a touchdown just one play later, bringing the lead back to the Mustangs.

Jeremy Kerley returned the Mustangs Kick for 83-yards. The Frogs turned Kerley’s drive into a touchdown and brought the Frogs back to the lead.

Kerley said that he went out against the Mustangs with all of the energy he had, even after feeling sick before the game started.

“I feel tired, I went out there and tried to give it everything I got,” Kerley said. “but you know that’s how you’re supposed to do it.”

The Frogs came back with another touchdown in the third quarter completed by James for a nine yard drive.

The Horned Frogs strengthened their lead in the fourth quarter after T.J. Johnson returned an interception with a 19-yard touchdown drive.