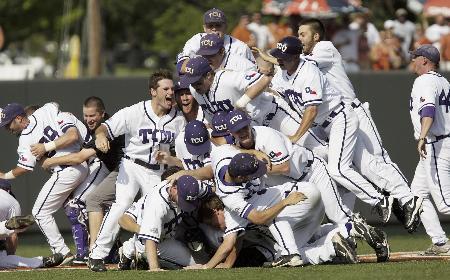 TCU (51-12) will open up Game 1 of the NCAA College World Series against Florida State (47-18) Sat. at 1 p.m. on ESPN. The College World Series, in its last year to be held at Johnny Rosenblatt Stadium in Omaha, Neb., is a double-elimination format until the CWS Final (best-of-three series). TCU will be the Game 1 home team.

TCU advanced to the CWS for the first time in school history after winning the best-of-three Austin Super Regional against the no. 2 seeded Texas Longhorns. TCU won the final game of the Super Regional series 4-1 at Texas’ home stadium-UFCU Disch-Falk Field. TCU will be the Mountain West Conference’s and the state of Texas’s lone representative in the tournament.

Here is TCU’s complete tournament schedule if the Horned Frogs were to advance to the CWS Final:

Check back on Dailyskiff.com for television scheduling changes and updates.