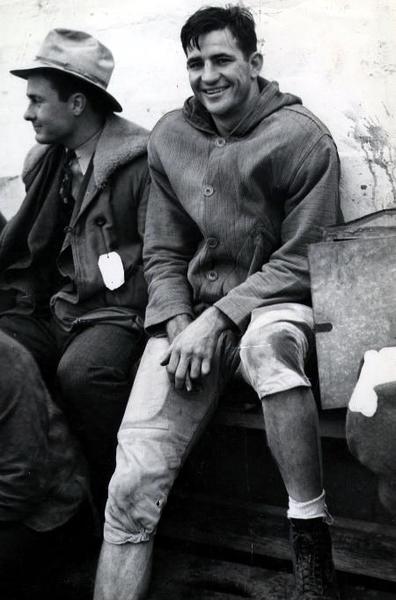 One of the greatest football players ever, Sam Baugh, who led TCU to a national championship and the NFL out of the dark ages, died Wednesday of natural causes. He was 94.

Baugh made his position into a focal part of the offense, escalating the sport into the passing age. He was an All-America at TCU and charter member of the NFL Hall of Fame after a 16-year career with the Washington Redskins, which ended after the 1952 season.

The honors didn’t mean all that much to him, though.

“I wasn’t interested in anything but that ranch and those cows and horses,” he said in 1990.

A Fort Worth sportswriter tagged him “Slingin’ Sammy” for his prolific, loose-hinged passing style, and the name stuck, even though he didn’t like it. He is identified as Sammy in the Redskins’ press guide, which credited him with seven club passing records five decades after he retired.

He retired with 13 NFL records at three positions: quarterback, punter and defensive back. His career punting average of 45.1 yards ranks second all time in NFL history, and he ranks second in NFL history in season completion percentage (70.3), most seasons (four) leading the league in yards gained and most seasons (seven) leading the league in completion percentage.

He was such a good athlete that, in 1943, he led the NFL in passing, punting and interceptions. He also briefly played professional baseball, his first love.

He grew up outside Temple and moved to Sweetwater after his freshman year in high school, when his father, J.V., was offered a job. His father’s lifestyle influenced Sam greatly, he once said. J.V.’s family ran a farm between Rogers and Heidenheimer in Central Texas.

Or, at least, it looked like a farm. It was actually a front for a gaming house, with a pool table, card tables, cock fights and greyhound races.

“Everything you could gamble on . . . they had,” Sam said. “My daddy played poker all the time, too. When he got older, he couldn’t see, and I’m sure they cheated the living hell out of him.

“I grew up knowing I wouldn’t bet on the sun coming up. You read a lot now about kids not having a shot because of their family life and things. You learn from your family, good or bad.

“I got enough bad to know I never wanted to live that way.”

He didn’t. He was married to the same woman, the daughter of a minister, for 55 years. He lived on the same ranch for 52 years. He was the epitome of stability, never much for fast living. He liked dominoes and golf and would binge on either.

He once starred in Westerns, playing Tom King in King of Texas Rangers, a 12-part serial that took six weeks to make in 1941. His sidekick was Duncan Renaldo, who went on to play the Cisco Kid.

Besides acting and football, he did a short stint as a calf roper. He signed a Triple-A contract with the St. Louis Cardinals in 1937 after being scouted by Rogers Hornsby, the former Cardinals Hall of Famer. He played third base but switched to shortstop upon Hornsby’s recommendation. He failed to hit better than .220 in one season and decided football was a better route to his ranch.

He was the Redskins’ No. 1 draft choice out of TCU, where he led the Horned Frogs to 29 victories and Sugar Bowl and Cotton Bowl titles in three seasons as a starter. He was a consensus All-American in 1936, his senior year. His coach, Dutch Meyer, called him “the greatest athlete I ever saw.”

He was named All-Pro nine times with the Redskins, the last time the year before he retired.

By Kevin Sherrington of The Dallas Morning News. This article was distributed by McClatchy-Tribune Information Services.