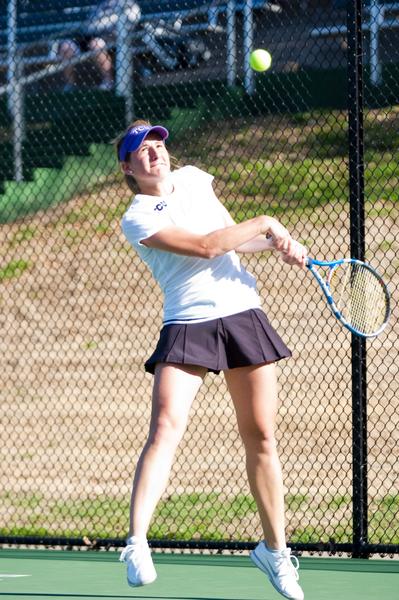 The Horned Frogs will put their all-time undefeated record versus The University of Texas at Arlington to the test Wednesday.

TCU is currently on a two-match winning streak, with their last victory taking place at Rice. The Frogs came back to win that match 4-3 after falling behind early 3-0.

The Frogs are 13-0 against the Mavericks. The teams met every year from 1995 to 2007 before a four-year hiatus leading up to the match this year.

Head coach Dave Borelli said that although TCU has an undefeated record against UT-Arlington, he felt the Mavericks were a much-improved team that could pose a bit of a struggle for the Frogs.

“I see a match like the one we had with Rice or Wake Forest, those kind of teams,” Borelli said, referring to matches the Frogs have won in come-from-behind situations.

TCU (4-6) has struggled with injuries this season, but Borelli said they are in the process of healing.

Sophomore Federica Denti was sidelined due to injury in Sunday’s match versus Rice. She will play in Wednesday’s UTA match, Borelli said.

“The bottom line is just to focus on getting ready and getting our team together and our heads ready,” Borelli said.

TCU has been strong in singles play, with five players who currently have multiple-match winning streaks. They are struggling in doubles play this season. The Frogs’ doubles matches will be their biggest threat Wednesday, Borelli said.

Junior Gaby Mastromarino, who is TCU’s Athlete of the Week and the team’s No. 2 doubles player, said the two-match winning streak should give their team some much needed momentum going into Wednesday’s match.

Mastromarino has struggled this season with a torn shoulder and bulging disc in her back. There have been talks of her undergoing surgery after the season is over, she said.

“I’m just blessed that I’m getting to practice every day,” Mastromarino said. “Now that I’m injured, every match I just try to play as smart as I can and to not take anything for granted.”

Mastromarino said she was hoping to add another win to the schedule after Wednesday’s match. She holds TCU’s best singles record at 6-2 and has won her last three matches. She won the final match to bring the Frogs to victory over Rice.

The Mavericks are coming off a 6-1 road win at UC-Santa Barbara Sunday. UCSB has an overall record of 9-3.

“We’ve played close matches, but we just have to play a little better with less errors,” Borelli said.