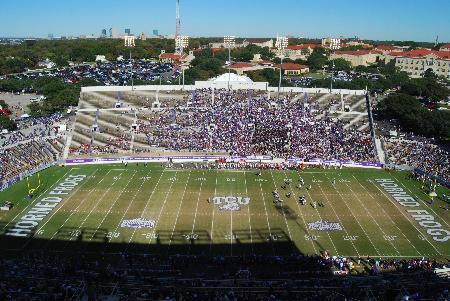 The TCU football team has gotten accustomed going to bowls. In 2011, TCU is already guaranteed a role in one of the nation’s biggest. Justin White has the story.

TCU will take part in a different kind of bowl game in 2011. The Horned Frogs will lend their facilities to the National Football Leagues’s AFC champion when the Super Bowl comes to North Texas.

Bill Lively, the president and CEO of the North Texas Super Bowl XVL Host Committee, visited campus Wednesday morning to talk about TCU’s involvement with the process. The AFC champion will stay at the Omni Hotel and practice at TCU, while the NFC champion will stay in Irving, Lively said.

“It’s a good place,” he said. “There was no debate about it. It was an easy choice for the NFL.”

This will be the first Super Bowl to split the teams’ practice sites into two different cities, Lively said. The Super Bowl will be a way of uniting Fort Worth and Dallas together, he said.

“If I-30 is a football field, Fort Worth is the West goal post and Dallas is the East goal post,” he said. “The stadium and Arlington are the fifty yard line.”

Lively spoke as a part of the Neeley School of Business’ Tandy Executive Speaker Series. David Dipple, Director of Development for the Neeley School, said it will be a great opportunity for TCU.

“I think TCU is going to be on the map for a lot of people in the community, and much more so than ever before,” Dipple said.

Super Bowl XVL is scheduled to be played at Cowboys Stadium on Sunday, Feb. 6, 2011