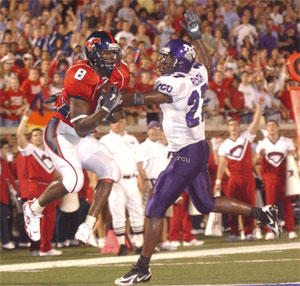 The offense sputtered, the defense gave ground and the kicking game failed the Frogs in their 21-10 loss to Metroplex rival SMU on Saturday night in Dallas, giving the Iron Skillet back to the Mustangs for the first time since 1998. Quarterback Tye Gunn faced pressure, missed targets and threw three interceptions on his way to a 16 for 36, 134-yard performance that characterized a futile Frog offense that managed only three points.

Head coach Gary Patterson had trouble explaining the ineffectiveness of Gunn and the Frog offense.

“We dropped a lot of footballs; that’s one thing I can tell you,” Patterson said. “I don’t know how much was Tye and how much was our receivers and our backs.”

Kicker Peter LoCoco went one of four on field goals in the game, missing from 41, 38 and 31 yards.

Patterson said the kicking game really hurt his team in the loss.

“We’ve got to grow up in that area,” Patterson said. “We’ve got to mature. We’ve got to have ice in our veins. You can’t let one kick turn into three bad kicks. We have to evaluate who we are going to have kicking.”

In his first college game, SMU redshirt freshman running back DeMyron Martin ran for 118 yards on 26 carries, caught two passes for 30 yards, and scored three touchdowns, two rushing and one receiving, to lead the Mustangs in their upset of No. 22 TCU.

Martin did most of his damage running through the middle of the Frog defense.

“He’s a good back,” linebacker David Hawthorne said. “They came in, and they just pounded the ball on us.”

“We just didn’t wrap-up,” Ray said. “We did a poor job tackling tonight.”

The Frog defense started strong, but with TCU leading 3-0 early in the second quarter, a key roughing-the-kicker call on an SMU punt gave the Mustangs a first down on the way to Martin’s first score of the night.

“You could tell that was a big momentum change, when they got that roughing the kicker,” Hawthorne said. “Everybody thought that the offense was about to go on the field and get a jumpstart, and (the defense) got back out on the field. I wouldn’t say we were tired, but it was in the back of our heads that we’re back out there.”

Offensive tackle Herbert Taylor said the Frogs did not overlook SMU after beating highly touted Oklahoma the week before, but the team did not play up to its potential.

Wide receiver Cory Rodgers provided one of the few bright spots for TCU, returning the opening kickoff of the second half 87 yards for a touchdown, cutting the SMU lead to 14-10, but the Frogs could not pull any closer.

SMU’s win ensured that the Iron Skillet will stay in Dallas until at least 2007, because the two teams will not play next season.

Gunn said losing to the Mustangs is painful.

Patterson said the team will have to bounce back and work toward its goal of winning the Mountain West Conference. Conference play starts Thursday at home against Utah.

Taylor said the Frogs will have to put the loss behind them and begin to focus on the MWC.

“We don’t have no choice but to come in tomorrow and focus, go through practice and just try to get ready,” Taylor said. “See what kind of team we really are.