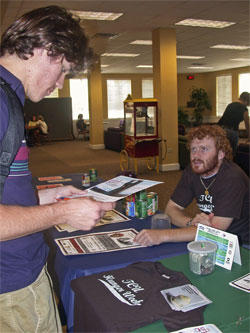 Hunger Week, seven days dedicated to helping end hunger by educating the school and community of its effects, will run through Sunday.According to the TCU Hunger Week Web site, hunger.tcu.edu, “In the developing world, more than 1.2 billion currently live below the international poverty line, earning less than $1 a day.”

Some of this year’s Hunger Week activities include a Heel Hunger 5K run, a hunger workshop, a movie night and a banquet.

Students are encouraged to come by during any of the activities to participate and give donations if possible.

All proceeds raised, including money and food donations, will benefit the Tarrant Area Food Bank, Bread for the World and the One Campaign, which are all dedicated to ending hunger locally and globally.

Andrea Helms, communications director for the Tarrant Area Food Bank, said there are more than 250,000 people who battle hunger and poverty just in the bank’s service area, which includes Tarrant County and those surrounding it.

Helms said any money donated to the Tarrant Area Food Bank from fundraisers like Hunger Week goes toward more than just buying food.

Helms said the Tarrant Area Food Bank relies on all private funds to supply the millions of pounds of food it needs every month.

According to the Tarrant Area Food Bank Web site, www.tafb.org, “A $1 donation helps provide food for four and a half meals.”

John Brennanis a representative for Bread for the World, an organization dedicated to ending hunger by lobbying the U.S. decision makers.

Brennan said that even though it is not a food distribution organization, it uses donations to act as an advocate for the world’s hungry.

Brennan said the organization helps to increase assistance for hungry people all over the world by campaigning against governmental issues such as cuts to food stamps.

Cyr said anyone can attend any of the Hunger Week events or stop by and drop off donations.

“This week is important because it puts a face to hunger,” Cyr said. “We need to realize what people go though all over the world just to eat.