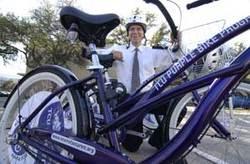 The university’s Purple Bike Program has been temporarily suspended due to lack of storage and maintenance space, the program’s director said.

Keith Whitworth, a sociology instructor, said that over the past year the bike program was housed in numerous buildings and at one point was located in his mini-van. During the summer the program did not have the resources to maintain the bikes properly which caused a backup in work.

Due to a lack of proper space for the program, the university allocated room in the Rickel building to be built specifically for the bikes, he said. However, the set space was recently given to the School for Classical & Contemporary Dance due to renovations on its current building.

Without a space to work with and maintain the bikes, he said, the program and the university mutually decided to temporarily suspend the program for safety. Whitworth said having the space given to another department did not bother him and that academics should always receive priority.

Until the bike program receives space in the Rickel building, Whitworth said he hoped to get approval for the use of a university van to perform mobile maintenance.

“The university has been extremely helpful in getting us space and of course space is a premium at TCU,” Whitworth said.

Pending final approval for the van from the Capital Projects Committee, the program would move into the van and start maintenance on an estimated 35 bikes the following week, he said. However, the committee will not be able to meet to discuss approval for the van until Sept. 16. Whitworth said, if approved, the TCU Physical Plant would provide the van for the bike program.

Director of Campus Recreation Steve Kintigh said he hoped the space for the bike program would be available by next August.

He said TCU Athletics Department officials have approved a parking space for the van underneath the northeast side of Amon G. Carter Stadium. This would give students a pick-up and drop-off location for the bikes, he said.

“They don’t have the connections here to get a car or bike on their own like the local students might have,” Arkel said.

She said she thought the program needed to be revived in order to meet students’ needs.