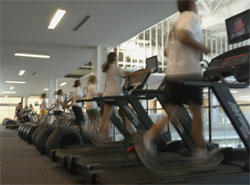 In the matter of survival of the fittest, TCU prevailed – or at least according to one magazine.TCU students have leapt over common college obstacles such as pizza, alcohol, late night snacks and lack of sleep to beat out 648 other schools, becoming the 12th fittest college in the nation, according to the October issue of Men’s Fitness magazine.

To some faculty members and students, the ranking makes sense.

“The bulk of students are doing what they have to do to stay healthy,” said Trey Morrison, assistant director of fitness and wellness for campus recreation.

Clement Ogujiofor, a senior physics and math major, said it appears quite obvious.

“I could see it based on looking around. It seems like everyone is pretty fit.” Ogujiofor said.”There’s not a high instance of obesity,”

To others, it is not so obvious- – or accurate.

Dr. Carol Thompson, associate professor of sociology, said the survey used, made by Men’s Fitness and distributed by The Princeton Review, did not ask questions truly reflecting whether the schools deserved its ranking.

“Findings are artifacts of what kind of questions they asked and what they ignored,” Thompson said.

Thompson questioned what Men’s Fitness deemed as “working out.” Even walking across campus is physical activity, Thompson said.

Morrison also said the survey probably was not scientific but The Princeton Review gives it some credibility.

Men’s Fitness created the questions and categories and hired The Princeton Review to collect data from an online poll filled out by more than 10,000 students across the nation, said Ben Zelevansky, director of data collection for The Princeton Review.

To ensure an accurate survey, the Princeton Review sent it out to as many students as possible, Zelevansky said.

If enough individual responses came from one school, The Princeton Review included the particular school in its 660 schools that were graded, he said.

Nate Millado, associate editor for Men’s Fitness and writer of the article, said that since the survey was sent out to so many students, it took more than a month to break down the data.

The Princeton Review broke down the data from the online responses into GPA-like scores, Millado said.

“We did this to try and get some of the schools to promote more fitness on their campuses,” Millado said of the ranking. “It’s a wake-up call to the obesity epidemic.”

The Princeton Review’s policy forbids the release of numerical and statistical results, said Zelevansky, but based on the ranking, TCU has already responded to growing obesity problems.

The only A TCU received was in Campus Culture of Fitness, and the consensus said TCU received it for a reason.

Morrison said the University Recreation Center, funding to keep the facility, drug and alcohol programs and counseling coincide to provide a healthier atmosphere at TCU.

“Unless you have the facilities, you’re less likely to exercise,” Morrison said.

Sophomore finance major Mallory Massanelli transferred to TCU from the University of Arkansas after her freshman year and saw differences between the campuses.

“There’s a lot more people using the facility here. It’s busy at all times, even during the day. At Arkansas, I never had to wait, it was only busy at night,” Massanelli said.

She also said when she first arrived at TCU she was impressed with the Rec Center and her previous school did not have nearly as many weights or machines.

Not only does TCU have a recreation center promoting fitness, but a faculty that exercises, said Morrison.

“As a whole, the faculty and staff does a good job promoting a healthier person,” said Morrison.”They care about the students.”

Beyond the Rec Center, TCU Dining Services has taken steps toward creating a healthier campus.

“We try to give students information to make responsible decisions,” Flores said.

To help inform students, he said, Dining Services has a Web site with several features.

The Web site, www.diningservices.tcu.edu, includes a nutrition calculator, allowing students to choose foods they plan to eat that day and calculate nutritional values such as caloric intake.

The site also gives labels to food served on campus, categorizing the foods as vegetarian, vegan, well-balanced and carb-friendly.

“It’s the students who make the decisions,” he said. “We make sure students are aware of the information available to them.”

Making information available is also how the Alcohol and Drug Education Center at TCU operates, helping TCU to receive a B for the Bad Habits category.

TCU is a moderate to low-use campus, Sparkle Greenhaw, associate director for the Alcohol and Drug Education Center, said.

“Alcohol use has consistently been a little bit below the national average,” Greenhaw said.

To gauge the use of alcohol and drugs at TCU, she said the school participates in a survey done by The Core Institute at Southern Illinois University Carbondale. The survey is the most widely used drug and alcohol survey by universities across the nation, Greenhaw said.

She said the institution that gathers the information ensures accuracy through random, stratified sampling and discretion of accepted surveys. For the sampling to represent the entire school accurately, Greenhaw said more than 600 surveys must be used, and the institution included about 705 from the 1,000 surveys distributed at TCU. The survey was distributed across campus to students in athletics, residence halls and classrooms.

According to the 2005 results of the Core Alcohol and Drug Survey, 62.3 percent of TCU students had consumed alcohol at least once 30 days prior to filling out the survey. Two weeks prior to filling out the survey, 38 percent had consumed five or more drinks in one sitting, which is considered high-risk drinking, according to the TCU Alcohol and Drug Education Center. The national average in 2004 for this type of usage was 48.8 percent.

Although TCU’s statistics are below national averages, Greenhaw said the Alcohol and Drug Education Center does not ignore the prevention and education of alcohol and drug abuse on campus.

Greenhaw said: “Any time one person has a problem, we’re concerned. We do the survey to know where to place our efforts.”

Many organizations and programs on campus add to TCU’s culture of fitness, but other aspects of TCU contributed to the ranking in Men’s Fitness.

Nick Kuehnle, a sophomore neuroscience major who works at the Rec Center, said it is not unusual to see a person working out multiple times in one day. Some of the staff members have had to ask people to leave the Rec Center out of concern, he said.

“There are some people who work out three times a day, seven days a week,” Kuehnle said. “That’s 21 times a week for a couple of hours each time.”

Kuehnle said he believes students regard exercising as “everyone else is doing it, so should I.”

Pat Pottinger, a junior kinesiology major, said he sees some male students who come to the Rec Center for a few hours at a time, spending more time working out than they do at their classes or studying.

“It’s like some people go to school here to benefit from the Rec Center,” Pottinger said.

Dr. Monica Kintigh, a licensed professional counselor for Mental Health Services, said: “I think there is pressure to be thin in society. I don’t know if there’s more pressure here than the rest of the society.”

Kintigh said Mental Health Services provides online screening for students to determine if they have eating disorders. From about 200 to 300 students who screen themselves, about 70 percent of those most likely have symptoms of eating disorders, Kintigh said. About 25 percent are willing to seek help, she said.

Millado said The Princeton Review said it did not have enough information to make a correlation between the type of school and its level of fitness.

Thompson said she does not find this surprising; students who go to private colleges are more likely to have the money to eat healthy and have access to gyms, she said. Upper classes, she said, tend to talk about themselves in terms of exercise and fitness.

According to the magazine, the two colleges receiving the lowest overall grades were University of Louisiana at Lafayette and University of New Orleans, both public and party schools.

“The Lafayette campus sits next to two solid blocks of bars,” Millado said.

Millado said many of the colleges deemed the fattest were in the South because the environment hinders fitness. In addition to the heat, the choice foods in Cajun country are high in fat, he said.

The fittest college, Brigham Young University, received a B+ for an overall grade. Millado said this was due to the lifestyles the students choose to lead and the school’s physical education requirements.