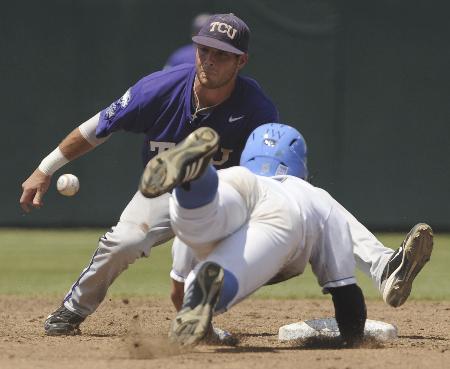 TCU was introduced to UCLA’s Gerrit Cole Monday, and it wasn’t the best of first impressions.

Cole (11-3), the New York Yankees 2008 first-round draft pick, dominated TCU with 13 strike-outs for all but one inning; Cole pitched eight innings and allowed three runs on five hits to lead the Bruins to a 6-3 victory.

“I thought facing (Gerrit Cole) who was outstanding, for us to have a chance we were going to have to pitch with him, just like last week when we played Texas,” TCU head baseball coach Jim Schlossnagle said. “Cole showed why he’s an All-American the way he pitched after the seventh inning. That was really, really impressive.”

TCU will move to the loser bracket in an elimination game rematch against Florida State Wednesday at 6 p.m. on ESPN2HD. Steven Maxwell will get the start for TCU Wed against the Seminoles.

“It wasn’t (Winkler’s) day,” Schlossnagle said. “He pitched behind the count, walked some guys and couldn’t keep the lead-off hitter off base.”

TCU shortstop Taylor Featherston’s three RBI triple in the seventh inning cut UCLA’s lead to 5-3, but the Bruins would answer with an unearned run in the bottom of the seventh to bring the lead to 6-3.

“That was actually the most comfortable at bat I felt,” Featherston said. “My stomach dropped there for a little bit, that was a pretty crazy, probably the most fun at bat in my entire life.”

UCLA head baseball coach John Savage said it was like a TCU home game Monday; Featherston’s at-bat might have been the loudest occasion of the 2010 CWS–credit Rosenblatt Stadium’s 23,345 fans, who have heavily favored TCU throughout the tournament, for rising to the occasion Monday evening.

Bruins’ designated hitter Blair Dunlap, a Baltimore Orioles 2010 draft pick, hit an RBI single past Frogs second baseman Jerome Pena to put UCLA up 1-0 in the first inning. Cole struck out the side in the top of the first.

With men on first and second catcher Bryan Holaday picked off Dunlap at second base to end the inning. Holaday had thrown out Dunlap on an attempted steal to second, but the throw came after the fourth ball of the at bat.

Winker put runners on first and second base in the second inning and center fielder Beau Amaral hit a RBI single to put UCLA up 2-0.

Center fielder Aaron Schultz walked with one out in the top of the third, but right fielder Brance Rivera lined a ball straight at UCLA third baseman Dean Espy, who threw out Schultz for the double play to end the inning.

It didn’t seem fortunes were favoring the Frogs after almost every bounce of the ball went their way Saturday against Florida State.

UCLA second baseman Cody Regis busted the game open with a 2 RBI blast over the left field wall on a 0-1 pitch.

Rivera made a spectacular foul ball catch over a fan who nearly fell over the railing on the first base side, but UCLA left fielder Jeff Gelalich knocked out the second home run of the inning, putting UCLA up 5-0.

The three-run third inning was enough for Schlossnagle to call up pitcher Paul Gerrish from the bullpen.

Gerrish didn’t allow an earned run in 3 2/3 innings of relief, but it was too little, too late for the Frogs.

After Holaday was credited a passed ball, shortstop Niko Gallego’s hit a sacrifice fly to center field to tack another run on for UCLA, bringing the score to 6-3.

Coats hit a single off Cole for TCU’s second hit of the game in the seventh inning. Curry followed with another single to put runners on first and second base with one out.

It was Cole’s fist sign of trouble in the game. After designated hitter Joe Wieke hit a harmless fly ball to center field, third baseman Jantzen Witte loaded the bases up with a shot to left field.

With a full-count and two outs with the bases loaded Featherston put the crowd on their feet with a three RBI triple to the gap. It was his seventh triple of the season.

Pitcher Dan Klein replaced Cole in the ninth inning for his 10th save of the season.

If TCU wins Wednesday’s elimination game against Florida State they would play UCLA Friday in another do-or-die game. A win Friday would set up a final elimination for the Frogs and Bruins for a chance to play in the CWS Final (best-of-three) against the Bracket 2 winner.