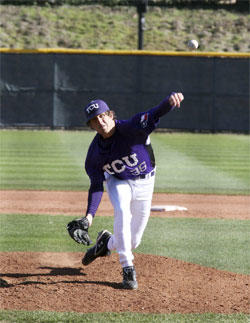 Pitchers Jake Arrieta and Taylor Cragin led the Horned Frogs (13-6) to victory as they shut out the Air Force Falcons 6-0 Friday night to open Mountain West Conference play at Lupton Stadium. Arrieta kept the Falcons'(5-16) quiet striking out 11 and allowing only four hits through eight innings.

The only problem Arrieta and Cragin seemed to have from time to time was finding the strike zone. The two walked a combined six players.

“We’ve been walking way too many guys,” Arrieta said.

Head Coach Jim Schlossnagle agreed saying that the pitching staff needs to do a better job because they’ve been allowing too many walks.

After walking his first two batters faced, Cragin was able to seal the win with help from sophomore second baseman Ben Carruthers who made a sliding stop at second leading Air Force into a double play and the Frogs’ one out away from victory.

The Frogs’ offensive support began early as junior shortstop Bryan Kervin doubled to lead off the first inning. Conlon hit a two run shot off of the Falcons’ starting pitcher Alex Truedale for his fifth home run of the season.

Conlon, who has a .438 batting average to lead the Mountain West, went 2-for-3 on the night.

Air Force attempted to make a comeback in the seventh inning after freshman outfielder Daniel Walker singled to right field. Freshman Ben Ausbun was then able to reach first on a fielding error by Arrieta but it wasn’t enough as junior catcher Josh Meents grounded into a double play to end the top of the seventh.

Things went differently for the Frogs in the seventh as senior third baseman Steven Trout singled to centerfield. Conlon then walked advancing Trout to second. Senior outfielder Austin Adams then hit an RBI single through the left side driving in Trout as the Frogs’ fourth run and moving Conlon to third. Junior Steve Ellington walked after entering the game as a pinch hitter for junior designated hitter Matt McGuirk. With the bases loaded junior catcher Andrew Walker reached on a fielder’s choice bringing in Conlon giving the Frogs’ a 5-0 lead.

The series will continue tomorrow as the two teams are slated for a 2 p.m. start with pitchers Chance Corgan and Mitch Brown scheduled to start.