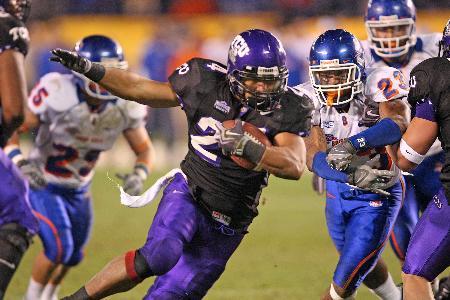 The two combined meant TCU’s defense was tough to handle for Boise State in a 17-16 win for the Horned Frogs on Tuesday night in the Poinsettia Bowl.

Henson, the team’s second-leading tackler during the regular season, missed the game because of academics.

In his place, Washington had six tackles, one for a loss, and three pass breakups.

“I couldn’t let the team down,” said Washington, who made his second start. “I knew I had to play a good game, play a great game, since he was out. I give all the credit to my teammates. They believed in me.”

Hodge was named the defensive player of the game, and his emotional leadership was huge.

“It was good for us because we missed Henson tonight as far as the emotion,” TCU coach Gary Patterson said. “Hodge got them all fired up before the ballgame; he took Henson’s place. It was very important to have somebody do that; he and Jason Phillips did it.”

Former TCU standout and current San Diego Chargers running back LaDainian Tomlinson was walking through the locker-room tunnel as time expired and the final whistle blew.

“That’s what I wanted to hear,” Tomlinson said. “I think it’s great that TCU came here and won, especially since the Chargers have a guy from Boise State (wide receiver Legedu Naanee).”

And how about TCU’s defense?

“It was awesome all night, especially against that Boise State offense,” Tomlinson said. “It was great.”

Gary Patterson challenged a play early in the first quarter, saying Boise State tight end Richie Brockel fumbled a pass reception that TCU linebacker Jason Phillips recovered. The ruling wasn’t overturned, though, as Brockel was down before the ball came loose and Boise State ended the drive with a touchdown. That marked Patterson’s third challenge of the season. H finished the year 1-of-3.

On the ensuing drive, however, TCU benefited from an official replay of a third-and-5 pass from Andy Dalton to Curtis Clay. The original play was ruled incomplete, but the play was overturned and TCU had its initial first down of the game.

Late in the fourth quarter, a Shae Reagan catch was reviewed even after TCU had run its next play, but it was called in favor of the Frogs.

About 4,000 tickets were distributed through TCU for Project Purple. Fans could go online and buy a TCU ticket to donate to Project Purple, which in turn gave those tickets to youth and military in the San Diego area.

An anonymous donor made sure those kids and military members were rooting for the Horned Frogs, too, because they were all given a purple TCU T-shirt and treated to a pregame tailgate at Qualcomm Stadium.

The Frogs wore black jerseys and purple pants for the second time this season – they also wore that combination when they beat then-No. 9 BYU 32-7 on Oct. 16.

Before that, they hadn’t worn that color combo since the Tomlinson days in 2000. TCU usually wears purple jerseys and black pants.

By Mercedes Mayer for the Fort Worth Star-Telegram. This article was distributed by McClatchy-Tribune Information Services.