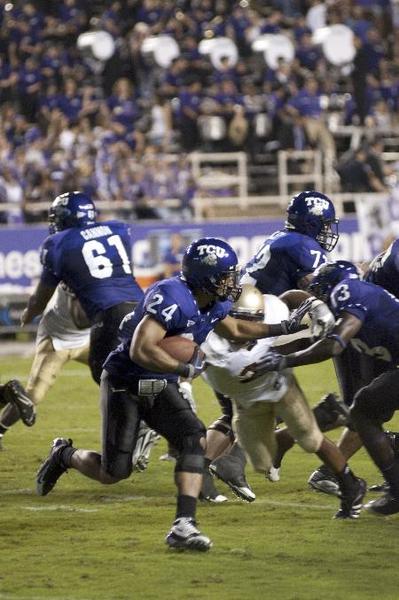 In a week where the Mountain West struggled, including losses for BCS hopefuls Utah and BYU, the Frogs emerged as the frontrunner for the conference title and a potential BCS buster with a 56 to 21 win over Texas State.

TCU had some struggles early on against Texas State, but got back on track in the second half.

TCU head coach Gary Patterson said that he was pleased that the team got the win, but there were issues from the game that needed to be addressed.

“We’ve got to be smarter about things,” Patterson said. “We can’t make mistakes in the kicking and can’t turn the ball over.”

Running back Joseph Turner had a huge game for TCU. He led the team in rushing yards with 129 on 13 carries and had three touchdown runs. It was his third career game with at least a 100 rushing yards.

“We came out flat, but Coach Patterson did a great job in the second half of getting us going and that’s when we really started playing well,” Turner said.

Quarterback Andy Dalton threw for 222 yards with a touchdown and an interception. He also rushed for 35 yards on eight carries.

“You have to improve each week and even though we won, there were times in the game where we could have played a lot better,” Dalton said. “You have to get up and prepare each week to win the game.”

All-American defensive end Jerry Hughes once again had a dominating performance for the defense. He recorded three sacks against the Bobcats and constantly put pressure on the Texas State quarterbacks.

“TCU has a proud tradition on defense to holding opponents to a certain amount of points,” Hughes said. “Having some mistakes tonight and watching Texas State capitalize on them really hurt us, but at the same time, it gives us a chance to learn from it.”

TCU travels on the road next week to play Clemson at Death Valley.