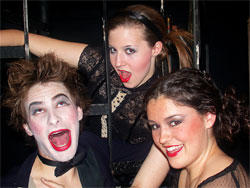 The TCU theatre department will present “Cabaret,” the story of an innocent singer and the master of ceremonies at a nightclub who attempt to entertain their guests while faced with the threat of war and Naziism, all this week in Hays Theatre.Students and faculty members have been rehearsing for the production, which was cast at the beginning of the semester, since March 6, said Rachel Rice, a freshman music and theatre major who also plays the part of Helga.

Both faculty and students came together to make this production possible, said Jennifer Engler, assistant professor of theatre and the director and choreographer for “Cabaret.”

“There is a faculty director/choreographer and a faculty lighting designer,” Engler said. “We have a guest designer from Seattle doing the costumes, but the scenic, sound, make-up and hair design as well as the stage management is all comprised of students.”

“Cabaret” was decided upon in late March last year, following a vote by a panel of faculty and students. The panel decided on the entire production season for this year, said Melissa Terrill, a freshman theatre and pre-business major, who plays Texas and one of the credited “Two Ladies.”

Although she was not involved with the decision-making process, Rice said she was told they chose “Cabaret” because they wanted to do something different from what has previously been done.

“‘Cabaret’ is a great piece of theater, and it has a lot to say about people, history and entertainment,” Engler said. “It is also a valuable production for our students to work on in the areas of acting, directing, design and technology. It has been a fun and rewarding collaborative process.”

The Hays Theatre is located in the Walsh Center for Performing Arts next to Ed Landreth Hall.