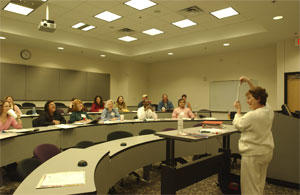 Ask Judy Gillette, librarian at Meadowbrook Elementary School, “Â¨CÂ¢mo estÂ  usted hoy?” (How are you doing today?), and you will probably receive a blank face. Ask her again after she completes the 12-hour Command Spanish program and you might hear, “Muy bien gracias. Â¨Y tÂ£?” (Very well, thank you. And you?).The Extended Education department is offering 260 Fort Worth Independent School District employees the opportunity to take free Spanish lessons.

According to the FWISD Web site, 42,964 students are of Hispanic descent, nearly 55 percent of the student body.

Julie Lovett, assistant director of Extended Education, said Command Spanish was chosen to receive a $20,000 grant through Chancellor Victor Boschini’s Vision In Action plan. It was one of 26 proposals that got selected.

Goal four of the Vision In Action plan says TCU is “to accelerate our connection with the greater community: Fort Worth, Texas, the nation, and the world.”

“Our hope is that the employees will be able to better communicate with their Spanish-speaking students and their parents,” Lovett said. “It is very difficult when a teacher is trying to discuss a student’s academic future and can’t communicate with the parents.”

Harold Nichols, vice principal at Polytechnic High School, said that about 58 percent of his students’ families speak Spanish as their primary language.

“I’m taking this class to be able to communicate with my students and their parents,” Nichols said. “I know hardly any Spanish.”

Maria Thibodeau, an instructor in Command Spanish, said that because the class participants range from librarians to administrators, she isn’t going to teach anything too specific.

“I am emphasizing vocabulary that will be useful to most, if not all,” Thibodeau said. “This includes greetings, school vocabulary used in meeting parents at the front office, numbers and especially ways to ask for clarification – such as “Hable mÂ s despacio” (speak more slowly) or “EscrÂ¡balo aquÂ¡” (write it here).

Charles Hoffman, director of student and social services at FWISD, said the response to the program was overwhelming with more than 400 requests received in the first two days after being announced.

“I hope the district participants will leave with a commitment to build upon the language base they will acquire in the classes, and have an enhanced understanding and appreciation for the Latino culture,” Hoffman said.

Furthermore, Hoffman said he wants FWISD and TCU to continue to work together in the future.

“I think the demand is there, and when the grant funds are expended, we will work to acquire more language training from the university,” Hoffman said.