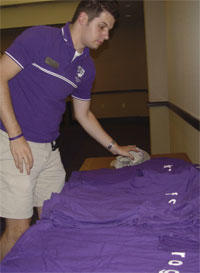 Fifty-four new students, who transferred to TCU because of Hurricane Katrina’s effect on their colleges, attended a “Welcome and Orientation Dinner” on Thursday.Chancellor Victor Boschini said he hopes the students feel welcome and receive the most they can from TCU.

“We want the students to feel like it’s going to be OK,” Murray said. “-We’re going to make this work.”

Some of the students said they plan to go back to their original universities once this semester is over.

Katie Franklin, a pre-med transfer student from Tulane University, said she considers herself a “visiting student.”

“I plan on going back to Tulane after this semester,” Franklin said. “Since I am pre-med, I just can’t afford to get behind.”

The majority of the new students are transfers and some are seniors.

“I want to graduate from Loyola,” Nassar said. “I’ve been a student at that university for four years and I’m dedicated to graduating from there.”

Nassar is only taking one class at TCU and she said she hopes to find an on-campus job.

Several of the students brought a parent or a friend with them.

“Everyone has been wonderful,” Juanita Davis said. “We are thankful that TCU accepted (Yolanda).”

Yolanda Davis said she is only going to be here for one semester.

Davis’ mother said, “Our dilemma now is whether the credits will transfer.