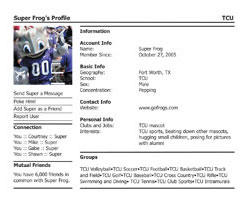 Access to the popular Web site facebook.com was recently blocked at the University of New Mexico, but TCU administrators say they do not intend to ban the online directory on campus.As of last week, there were 7,353 registered TCU accounts and people at more than 2,000 universities with Facebook accounts, said Chris Hughes, spokesman for Facebook.

The privacy concerns at New Mexico led administrators to block access to Facebook on the campus, said Catherine Luther, spokeswoman for the New Mexico Computer and Information Resources and Technology department.

“Originally it was a routine blockage because of spam, and later the dean of student’s office was concerned because of privacy issues,” Luther said.

But the more than 7,000 TCU users need not worry because TCU administration does not intend to follow suit, said Mike Russel, associate dean of campus life.

Russel said the administration determined earlier in the semester that Facebook and similar sites should be available.

TCU intends to approach it from an educational perspective, informing students about security and privacy risks through e-mails and at orientation, Russel said.

He cited birth dates, phone numbers, class schedules and physical addresses as things that should not be included in a Facebook profile and said to use caution when selecting a picture to post. Russel said provocative pictures could send the wrong message to strangers.

Facebook users place information on their profiles with a certain level of trust, but they do not often consider the negative ramifications, Laster said.

Many people do not think about how easily the information can be accessed and how it could possibly be used in a harmful manner, Laster said.

Within the past year, there have been an estimated three to five reports of possible harassment that can be traced to Facebook, said TCU Police Sgt. Kelly Ham.

Concerned students brought copies of conversations they had on Facebook to the TCU Police Department for review.

However, Ham said he did not find the reports to be cases of harassment.

He said one report brought up slight concerns but was quickly resolved.

Hughes said users can protect themselves by configuring their privacy settings to a level they are comfortable with.

“At the end of the day, our users have complete control over their information and should only display that which they feel comfortable with,” Hughes said.

He said they have not heard of other universities blocking the site.

Luther said there are currently discussions between the New Mexico attorney and the attorney for Facebook.