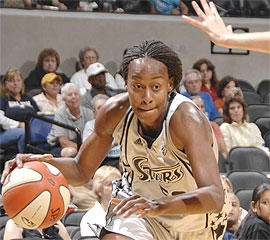 Irvin, who spent the last three seasons on the TCU staff, recently signed a free-agent contract with the WNBA’s Chicago Sky.

“I want to thank Sandora for all of her hard work on our staff over the last three years,” Mittie said. “It was great to have her back in the program. She was a great asset for TCU and will continue to be a great ambassador for both the University and our program in the future. It was an easy, yet at the same time difficult, decision for her to leave and continue her basketball career. It will be great to see her back on the court.”

Following the conclusion of the Sky’s season this fall, Irvin plans to continue her career oversees before returning for the 2011 WNBA campaign.

“It’s been a blessing to work for TCU the last three years. I have learned a lot from my time on Coach Mittie’s staff. It was great to be around the program again, and I wanted to gain that experience of working on a coaching staff on a day-to-day basis. My three years back at TCU helped me to mature and prepare for my future in basketball.”

Irvin returns to the WNBA following a one-year absence spent rehabbing a knee injury. She has played four previous professional seasons between two-years stints with the Phoenix Mercury (2005-06) and San Antonio Silver Stars (2007-08). Originally drafted No. 4 overall by the Mercury in 2005, Irvin’s last season featured a 2008 Western Conference Championship while playing for San Antonio. Former TCU teammate Adrianne Ross was also a member of the same squad.

One of 11 players to make Chicago’s opening-day roster, Irvin played in both of the team’s first two games this past weekend. She scored four points in eight minutes of play in the Sky’s opening matchup Saturday against the Connecticut Sun while adding two points the following evening against the New York Liberty.

Irvin returned to TCU as the program’s Director of Operations in the fall of 2007 following her first season with San Antonio. The Frogs compiled a 65-32 record with two NCAA Tournament appearances in Irvin’s three seasons on staff.

A former Frog herself, Irvin ranks as one of the most decorated student-athletes in the history of TCU athletics. She was named a first-team All-American by the Associated Press as a senior in 2004-05 while leading the Frogs to a fifth consecutive NCAA Tournament appearance. Also one of four finalists for the prestigious Naismith Trophy that same season, Irvin notched NCAA records for blocked shots both in a single game and for a career with 16 and 480, respectively, in 2004-05. The career mark stood until it was broken this past season by St. Mary’s Louella Tomlinson.